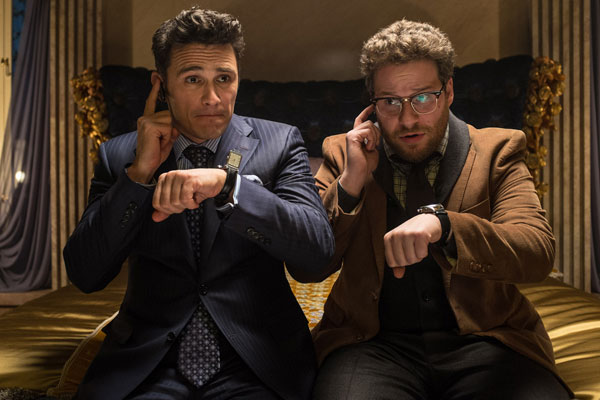 Every once in a while, a movie is more than a movie, but it’s surprising when that becomes the case with a punk-ass comedy, one that’s more puerile than pointed yet not without some good laughs.

The Interview, a bromance starring Seth Rogen and James Franco, is one for the history books; film historians and culture commentators will be poring over this film and its attendant fallout for quite some time to come. They’ll talk about the international incident it sparked; a corporation brought low by malicious hacking; a United States president stepping into the business affairs of Hollywood; the meek voices of Hollywood trade associations like NATO and the MPAA; the unprecedented release of a major studio film through a day-and-date release pattern, placing it in theatres and online simultaneously; the endless parade of posturing and blame-shifting by numerous players; the hue and cry of Americans of all stripes angry about being told what they can and can’t watch; and the Art House Convergence, the national association of independent movie theatres that petitioned Sony to show the movie despite the studio's previous declaration of a complete cancellation of the release. The angles on this story, which morph and newly erupt daily, are, at present, seemingly endless. Yet, The Interview is still just a movie, and to review it as such is my only objective here.

A better-than-average bromantic comedy, The Interview is, not intrinsically, a satirical empire-toppler. Broadly funny and well-acted, the film lands some well-placed jabs – more often at the expense of American values than North Korean politics. There are also, as is part of the formula in these bromances, a great many jokes that are casually racist, sexist, and homophobic (to name a few interest groups besides Kim Jong-un who might take offense at certain wisecracks others consider funny). Still, the jokes rain down in enough abundance that they hit willy-nilly, like shrapnel.

The strongest part of the film is its opening third, prior to the arrival in Pyongyang of Dave Skylark (Franco), the fatuous host of the U.S. talk show Skylark Tonight, and his longtime producer Aaron Rapaport (Rogen), who regrets not living up to his journalism-school potential. In addition to the singular coup of being granted an interview with the reclusive Kim Jong-un, the pair are also on assignment from the CIA to assassinate North Korea’s Dear Leader. Once on the north side of the 38th parallel, The Interview bogs down as Dave bonds with Kim (Randall Park, who brilliantly humanizes the despot), and the guys get into some clumsy kerfuffles with the poison they’re carrying. After this drooping middle section, the film makes a tonal shift and becomes an all-out, guns-ablazing action picture. It’s bloody and violent (and – spoiler alert – Kim’s head explodes, as you’ve most probably already learned from the testy, purloined email exchange between the filmmakers and the studio regarding specific details). To put it in context, the head explosion comes after much gunplay, fingers getting bitten off, and the launching of a Russian tank. Instead of comedy, the film lurches more into Michael Bay territory, and this is what causes the film to lose its mooring and create an uneasy feeling among viewers.

It’s incalculable how many people are now watching The Interview because they see it as a way to stand up for freedom of speech – and there’s a lot to be said for that. I might suggest that another way to stand up for this freedom would be to send an end-of-the-year contribution to the ACLU or some other organization that strives daily to protect First Amendment rights. The Interview, symbol though it’s become, ain’t nothing but a movie. 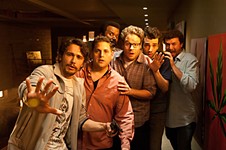 This Is the End
Be mindful when partying at James Franco's house: You could get stuck there for the apocalypse with Seth Rogen and Co.