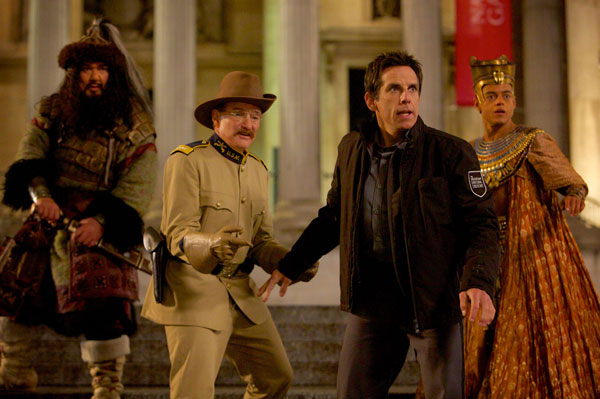 Night at the Museum: Secret of the Tomb

A number of critics seem to have been stunned to realize in the middle of this film that they were watching Night at the Museum 3, the series in which all the attractions in New York City's American Museum of Natural History come to life after dark. Perhaps they had misremembered the title as an obscure Shakespearean comedy. If you're not expecting a cross between The Philadelphia Story and Groundhog Day (peak achievements in American film comedy), by way of Preston Sturges, this sequel will do you just right.

Surprisingly well-crafted for something as aggressively dumb as this, the real surprise is the cast. All-star casts more often turn into a series of dud performances, but it is gratifying how many of them offer fine turns here. In the lead, Stiller is overly serious and somewhat oblivious, yet as focused as a guided missile. Wilsons Owen and Rebel, Coogan, Van Dyke, and Gervais all have their moments, with some having several.

Nice effects work, a relatively swift-moving narrative, sweet performances, and, by now, a well-worn premise prove inspiring this time out, and not deadening. Robin Williams, in one of his final performances, is fine. He does seem tainted by a certain sadness, but that just may be a misreading of history. "I yam what I yam," as Popeye said. Adding, "And that's all that I yam.”