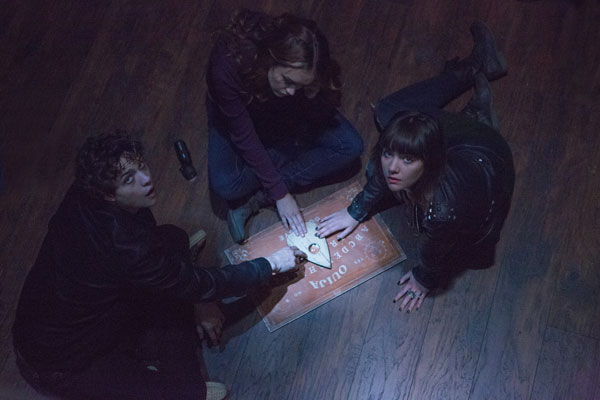 Hasbro’s long-lasting occult board game gets its own starring role in a film that makes those other recent Hasbro plaything adaptations – namely Transformers and G.I. Joe – look like triumphs of subtly engineered cinematic magic. Too bad then that there’s very little magic – black, white, or whatever – in this watery mediocrity that packs as much spook-show punch as Charlie Brown’s hole-riddled Halloween costume.

After the mysterious (but inventive, with Christmas lights!) suicide of her BFF Debbie (Hennig), teen smart girl Laine (Cooke), along with boyfriend Trevor (Kagasoff), sister Sarah (Coto), and pals Pete (Smith) and Isabelle (Santos), naturally spy the dead girl’s Ouija board and attempt to uncover the riddle of her untimely demise. As presumably everyone in the world (except the film’s protagonists and victims) already knows, Ouija boards aren’t to be used as toys, and using them by yourself, alone, in the dark, is a surefire way to accidentally summon soul-sucking entities from the lands beyond. Happily, there turns out to be a spare Ouija board with a functional planchette (the little cotton feet on my own board disintegrated decades ago) in Debbie’s spooky old attic. Before you can spell “good-bye,” the teens have opened themselves up to the same evil force that claimed their friend’s life. The only question worth venturing quickly becomes: Who will die next, and why should we care? Magic 8 Ball says, “Ask again later.”

Ouija marks director White’s feature debut and if it’s a portent of things to come, it’s an ill omen indeed. There’s nary a chill or shock cut in the film that isn’t grafted from some other relatively recent fright flick, and while the cast is uniformly game for the barely-there storyline, they’re also as generically high school as you might imagine. The only genuine eeriness in the film is generated by Insidious’s Shaye as a demented but still corporeal relative to one of the spirits contacted via the troublesome board. That’s not saying a lot, I realize, but in a film this rote and tedious, it’s the only highlight to be found.