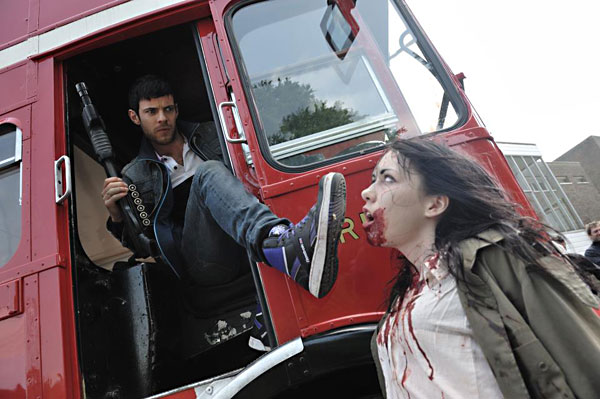 Like Guy Ritchie meeting George Romero for a bite with The Living Dead at the Manchester Morgue, this bloody good zom-com (and Fantastic Fest 2012 favorite) from the UK posits a clash between the undead and the nearly dead to surprisingly guffaw-inducing effect. In the first two dueling, ultimately converging plot lines, Hardiker and Treadaway are Terry and Andy, a pair of brothers who hatch a bound-to-be-botched bank job in order to save their grandfather’s retirement home from the wrecking ball. As fate would have it, their scheme goes utterly awry just as the developer’s backhoes unearth a plague of zombies in East London (shades of Hammer’s 1967 classic Quatermass and the Pit). The second, and frankly more engaging story pits the determinedly vital oldsters against the ravening hordes as they barricade themselves in their ramshackle pensioners’ retreat.

Scripted by Lucas Roche and James Moran (Tower Block, Severance) with an affectionate eye firmly fixed on the slow-moving but quick-witted golden-agers, Cockneys vs. Zombies quickly overcomes its dull-as-death titling and turns out to be the best zombie yuk-fest since Edgar Wright broke new, unhallowed ground with Shaun of the Dead nearly a decade ago. If it’s not quite up to par with the viscera-drenched loopiness of, say, Peter Jackson’s Dead Alive, well, really, what is? Zombies have been clogging theatres since the premillennial era, and, of late, have become downright annoying in their prevalence. I’ll grant you that they’re an artistic outlier indicative of our collective, global anxieties, but must they be so overwhelming in their sheer numbers and clumsy, shambling ineptitude? (The movies, I mean.) What Romero hath wrought has come back to gnaw and gnash a thousandfold and when even Brad Pitt turns up battling the things that go bite in the night, perhaps a cinematic cease-fire is in order. (And this from someone who subscribes to both Fangoria and Video Watchdog.)

Smartly, director Hoene has populated his cast with some stellar Brit-cinema legends, chief among them Alan Ford (Snatch’s Brick Top) as Terry and Andy’s hard-case grandpa Ray, and Honor Blackman, best known on these shores as Patrick Macnee’s original, lethal gal of Sixties cult-TV classic The Avengers. Other notables include British legend Richard Briers as the dotty Hamish, who makes a memorably slow-burning mad dash – via walker, no less – from the equally diminished dead folk. It’s fun, gore-drenched, and even touching at times. All that’s missing from the toothy chaos and broad comedy on display here is Dame Judi Dench and the kickass title that could have been: The Best Necrotic Mandible Hotel. Your Highness
This vulgar medieval travesty is awfully good fun when it works.