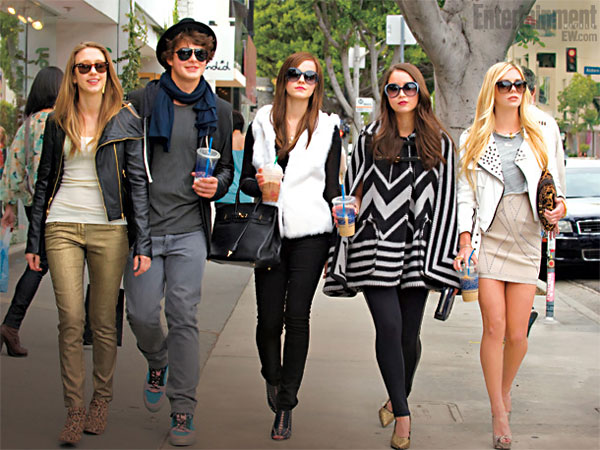 In her last three films – Somewhere, Marie Antoinette, and Lost in Translation – writer/director Sofia Coppola has, with a steadily decreasing degree of success, examined the personal plight of the rich and famous. (I’d say emotional plight, but her last film, Somewhere featured a central character so dreary as to be utterly affectless.) The rich and famous are still front and center in The Bling Ring, but instead of remaining the subjects of the drama, they have become aspirational figures for the story’s true protagonists. Fame and fortune are now packaged like obtainable commodities sold in perfume-sized bottles from coast to coast, but it’s the greater intangibles of the lifestyle that remain out of reach. The teen thieves at the center of The Bling Ring don’t want to dress and smell like the celebrities they admire; they want to be the celebrities and the objects of admiration themselves.

Introspection, however, is not a matter of concern in The Bling Ring. Based on true events as told in a Vanity Fair article by Nancy Jo Sales, the film tells the story of a group of suburban Los Angeles teens who rob the homes of celebrities while they are out of town. They mostly steal totems of style and status to create pictures to post on their Facebook pages rather than pilfer items of great value to fence or trade. They are somewhat like a nonviolent version of the vacant kids portrayed in Spring Breakers (which was released with great success by the new distribution outfit A24, which is also releasing The Bling Ring). Only one member of the so-called Bling Ring could be said to be truly sociopathic, and that’s their ringleader Rebecca (Chang), who graduates from thefts from unlocked cars to larceny from unlocked residences. Neither is it enough for Rebecca to simply steal: She always wants to lounge about amid the celebrity’s possessions well after gathering the loot she plans to take with her. Perhaps the greatest surprise revealed in the film is the number of wealthy people who don’t lock their cars and homes or toss the keys under the mat. As for the teen thieves, no surprises or insights are revealed.

The problem with The Bling Ring is that it feels as soulless as its young protagonists, and of course there’s little sympathy to be found either for the story’s über-rich victims like Paris Hilton and Lindsay Lohan. We learn very little about the group’s motives and yearnings and why they, like us, are drunk on the scent of celebrity perfume, and why we have allowed it to permeate our culture. The Bling Ring mostly smells of rotten apples.