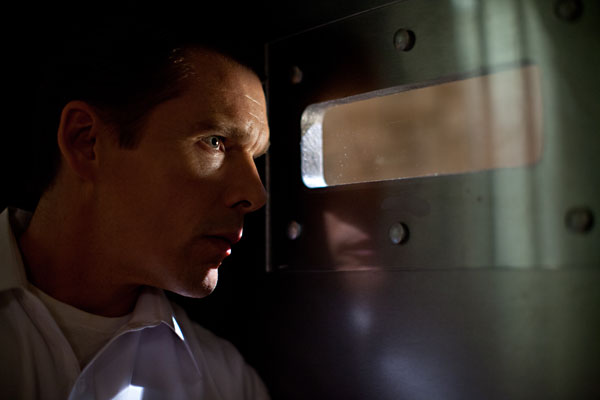 In this horror-thriller set in the year 2022, America has become a nation "reborn.” The economy is healthy and crime has become almost nonexistent due to a national event called the Annual Purge. For 12 hours (7pm-7am) every March, citizens are allowed to commit murder and other acts of violence with impunity: a national bloodletting that manages to keep the dark forces at bay for the rest of the year. Some theorize that in addition to quelling the beast within, the ritual helps cleanse society of its undesirables since, most frequently, the victims are homeless, members of the lower classes, or persons of color. The Purge has been very good, indeed, for James Sandin (Hawke), who has made a fortune selling high-end security systems to all his neighbors in the gated community where he and his family live.

After establishing this interesting premise, writer/director James DeMonaco only scratches the surface of its implications before devolving into a creepy roundelay of murders and deaths averted. Instead of barricading themselves within their homes, why don’t the rich just leave the country during the Purge and head for a mini-vacation in St. Bart’s? And wouldn’t it be more likely that that society’s have-nots would use the occasion to vent their anger toward those who lord over them the rest of the year?

Once Sandin battens down the hatches on the night of the Purge, he and his wife Mary (Headey) and their two teenage children – Charlie and Zoey (Burkholder and Kane) – prepare to spend the evening indoors. But their security is breached when Charlie sees a black man (Hodge) on the street desperately seeking refuge from attackers in pursuit. The bleeding-heart boy lets the injured man in, and soon his frustrated killers come ringing the Sandins’ doorbell, demanding the family turn over its prey, or else face the same fate. Wearing sinister masks, the group’s spokesman (Wakefield) wears a prep-school outfit and is all the more disturbing due to being seen mostly through the fish-eye lens of the Sandins’ security cameras. The would-be intruders cut the power, and in the dark chaos the Sandins become separated from one another amid their McMansion – which allows for lots of stealth attacks from behind. There is also a subplot about Zoey’s boyfriend (Oller), a storyline that becomes extraneous roadkill before it ever gets going.

This is the third pairing of Ethan Hawke and James DeMonaco, who wrote and produced the smart remake of Assault on Precinct 13, which The Purge resembles with its plot about the good guys barricaded for the night from the marauding mobs without. There are also shades of Straw Dogs here, although The Purge opts for more basic scares in the dark than musings on primordial manhood. The low-light lensing by cinematographer Jacques Jouffret, however, is admirably accomplished. Hawke also worked previously with co-producer Jason Blum on Sinister, although Blum is best known for his involvement in the Paranormal Activity franchise. The Purge maintains a claustrophobic tension throughout but it stumbles over too many loose ends among the bodies. 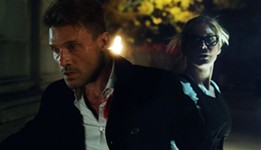 The Purge: Election Year
The third entry in this nasty series adopts a political bent 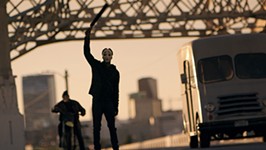