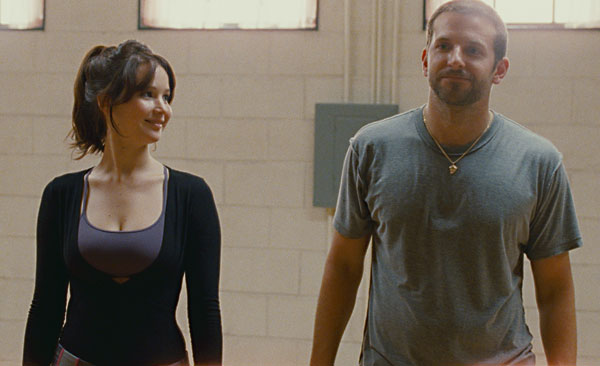 “Negativity is a poison like nothing else,” says bipolar Pat (Cooper), who is newly released from an eight-month stint in a state institution following a violent episode. Pat is convinced that exercise and a positive outlook – his “silver linings” philosophy – are all it takes to get his estranged wife back; his family and his therapist, however, think some pretty serious meds are in order.

The smartest solution may lie in some balance between the two, and Silver Linings Playbook similarly rides the center line in its empathetic but facile look at mental illness and its light hand with a new romance. When Pat meets Tiffany (Lawrence), a young widow raw with raging grief, they trade rat-a-tat-like their past experiences with prescription drugs. It’s a funny exchange, but a meaningful one, too: They speak the same language. A tentative friendship forms, and Pat’s days become newly powered with purpose and direction.

Writer/director David O. Russell, adapting Matthew Quick’s novel, is in his element here: The family in crisis and true-to-life cultural/geographical texture have been ongoing considerations of his, from 1996’s Flirting With Disaster to 2010 Best Picture nominee The Fighter. Pat’s family may not be as flamboyantly dysfunctional, but there’s authenticity in the way they fret and spar and try to smooth Pat’s wrinkles with routine, like his mother’s Sunday football spread of “crabby snacks and homemades.” His father has his Sunday routines, too – the remote controls have to be angled just so, and he’s convinced his son is the Philadelphia Eagles’ lucky charm – and Russell and De Niro make subtle work of suggesting a mental illness family lineage. In one late scene, they move past suggestion for a harrowing meltdown held back by the presence of a motley array of wisecrackers; it made me sorry for what might have been, had Russell’s ambition tilted a few clicks away from comic absurdity and toward something more probing.

That isn’t to begrudge what Silver Linings Playbook actually is, which is consistently funny and, as it builds to its conclusion, also very sweet fun. Cooper mostly tamps down that Sexiest Man Alive demeanor that follows him from film to film, and Lawrence – a continually startling young talent – counterpoises her Bardot beauty with a blistering snarl. They both play hurt people clawing their way toward wellness, but it’s Lawrence who makes you feel the hurt in your heart – and the hope that it’ll get better soon.