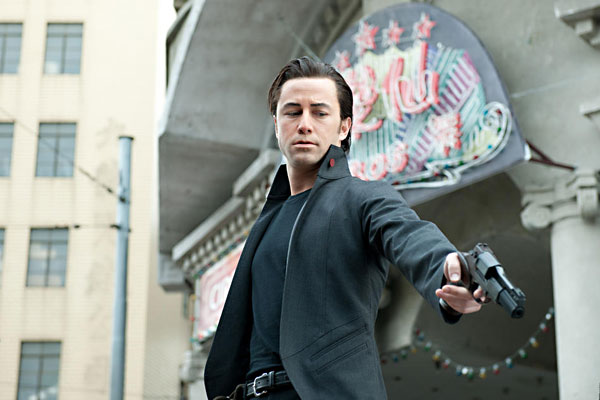 “You stupid little shit.” Who hasn’t thought much the same when contemplating one’s younger self, so full of bluster and imprudence? The clever conceit of this time-travel thriller, however, is that when Joe, the former assassin played by Bruce Willis, assesses his wayward youth, he isn’t sifting through memories but rather staring young Joe (Gordon-Levitt) in the face – and young Joe wants him dead.

Young Joe, orphaned early and taken in by the mob, turns a tidy profit as a gun for hire. The job’s easy enough: He goes out into a crop field and waits, locked and loaded, for the appointed hour when unseen bosses operating 30 years in the future zap back victims for Joe to dispatch. (What better place to hide a body than the past?) In chilling imagery, the victims always arrive with their hands tied, and their heads covered by a white sack. That is, except for that one time, when some bald jerk with a familiar jawline arrives unhooded, and Joe realizes he’s meant to assassinate his future self. A moment’s hesitation is all it takes for Future Joe to get the upper hand – it’s not like he doesn’t know how the other guy thinks – and the chase is on. And what a remarkable, locked-jaw tension that makes, between two iterations of the same man – one wanting to rewrite history, the other frantic to set it straight.

With his third film, writer/director Rian Johnson has crafted his most mainstream picture to date, without sacrificing one whit of the dazzling inventiveness or finely detailed characterizations that distinguished his earlier pictures: the underseen high school noir Brick and the underloved crime caper The Brothers Bloom. That said, some of that fine detail is lost by immobilizing Gordon-Levitt’s face with prosthetics to make the resemblance to Willis stronger, an unnecessary distraction from the superlative work of both men within a cast that’s teeming with talent. See also: Daniels, as a shaggy-bearded, desk-jobbin’ mafia don; Blunt, as an embattled single mom; and Gagnon, as a toddler with ice in his veins and a plot hinge he brilliantly shoulders.

Looper makes a full-meal entertainment out of piecemealing genres: It boasts the kicky mental gymnastics that come with time-travel terrain, the relentless rapid heart rate of a crackerjack thriller, and the bursts of extreme violence, buttressed with black humor, of a modern actioner. (In a neat feat, Johnson concocts an ingenious set-piece that is at once entirely bloodless and god-awfully gruesome.) But all that breathless running and shooting and rocketing between past and future is just dressing for what is – at its anguished, morally complicated core – a blistering portrayal of the cycle of neglect. None of that time-travel hoo-haw or future-cool machinery would amount to much without Johnson and his collaborators’ precise and empathetic attention to the inner ache blighting the so many miserables of Looper’s fucked-up futurescape. If you’re looking for guts-splaying, Looper certainly satisfies – but it’s the emotional guts of the thing that’ll hound you long after.

See our Fantastic Fest coverage for an interview with Rian Johnson.