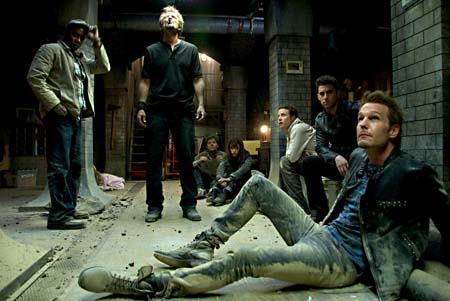 The Divide opens with a bang and ends with a whimper. In between, there's enough post-apocalyptic scenes of man vs. man, man vs. woman, and man vs. still other men in pristine white biohazard suits to qualify it as one of the most downbeat, end-of-the-world films ever made, and made poorly at that. The upshot is that if the Republican presidential candidates manage to catch a screening, Rick Santorum's head might explode à la Scanners and the whole race would be instantly winnowed down to Ron Paul, who'll remind us that this is exactly what he's been going on about the whole time. Bully for you, Ron, but I'll take instant vaporization, please.

Director Gens helmed a genuine shocker back in 2008 with his visceral, arresting debut, Frontier(s). Strangely, for a director with a such a compositionally clean (albeit bloodstained) eye as Gens, he quickly followed that up with the dumb-as-dirt Hitman and little else. The Divide can be seen as Gens returning to his far lower-budgeted roots or as an expression of his dismay at the vagaries of working with a major studio. (Hitman, produced by 20th Century Fox, was by all accounts a nightmare for all involved, not least whom was the French-born director) Whichever is the case, The Divide is a shambles, and not in a good way.

As nuclear warheads rain down on New York City, a small group of apartment dwellers finds a semi-safe haven in the bomb-shelter basement of their building. Lorded over by former FDNY firefighter and superintendent Mickey (Biehn, chewing scenery faster than an East Village rat chews through a Williamsburg hipster's leather iPhone case), this motley, unsympathetic crew includes Arquette as a mother whose child is kidnapped early on by the biohazard baddies, Hostel Part II's German as an enigmatic good(-ish) girl Eva, and Holmes as the sexually indiscriminate predator Adrian. There are others, but between their slow goings by radiation poisoning, the complete and utter breakdown of civil convention, and the fact that every single character is painted only in a slightly different shade of “ick,” who really cares?

The cynic in me notes that the whole, dismal enterprise is just a cheap steal from Roger Corman's 1955 film Day the World Ended. At least that single set-bound cheapie had a three-eyed mutant to enliven the otherwise stagy proceedings. Gens' film, while a far darker vision of the day the world ends, is more sexually sordid than satisfying. Save the humans? Why bother? 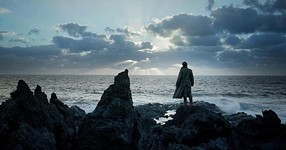 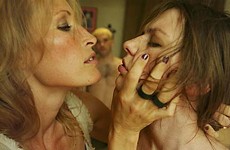