In theory, “friends with benefits” sounds like the world’s awesomest bottomless buffet, wherein sex and platonic friendship are both for the taking so long as you grab a clean plate for each trip. But humans by nature are messy creatures, and the theoretically easy compartmentalization of the mental and the physical, in practice, confuses us faster than you can say, “Can’t we just cuddle a little while longer, at least until The Daily Show’s over?” In theory, Dylan (Timberlake) and Jamie (Kunis) are on the same page. They’re both bruised from recent breakups, which take place on opposite coasts in the film’s first minutes. Crosscut in staccato beats, the breakups’ talking points riff off one another – “emotionally needy” gets play in New York, while a snigger-inducing declamation that “John Mayer is our generation’s Sheryl Crow” goes down in L.A. Both bust-ups end with Dylan and Jamie, the dumped parties, vowing to keep it simple from here on out. They’re professional acquaintances first, with Jamie, a Manhattan headhunter, recruiting L.A. native Dylan for a job opening as art director at GQ. Like a rocky first date, the film tries too hard in this early stretch, cramming in breathless banter before we’ve gotten a feel for the characters. It settles down. As Dylan and Jamie shift into genuine friendship, Friends With Benefits finds its footing, and the transition – for them and the film – into a no-strings-attached sex arrangement not only seems effortless but also is very funny, line to line. The middle of a movie is often where filmmakers lose their way, but Friends With Benefits nails this stretch, in which nothing very remarkable happens as two people talk, in bed and out of bed. There’s a fine line between fun-dirty and ick-dirty – sometimes you can’t identify the line until it’s been crossed – and this film keeps its toes on the right side of raunch. That has everything to do with the sometimes larky, sometimes barky chemistry between its leads: Kunis, who can convey warmth then wrath within two sharp breaths, makes a tart, lovely foil for Timberlake’s doofy charms. But then – as is wont to happen, in movies and in life – shit gets complicated, and the fundamental thinness of Friends With Benefits becomes unavoidable. Chemistry is great and all, and who doesn’t love a truly blue zinger, but when you strip the fun from the film and shine the inevitable third-act light on the characters’ neuroses – the ostensible roadblock to a romantic relationship – there’s not much to chew on. Jamie’s hang-ups are especially ill-defined; while the script repeatedly announces her Prince Charming fixation – oh, yawn – that shorthand doesn’t at all square with Kunis’ salty-dog characterization. As in Will Gluck’s directorial breakthrough, the more ambitious Easy A, he leans too hard on pop-culture touchstones to carry the comedy, and a fictitious movie-within-the-movie – an intentionally cornpone romantic comedy starring an unbilled Jason Segel and Rashida Jones – only highlights Friends With Benefits’ chief frustration: that it’s smart enough to call bullshit on Hollywood’s rom-com clichés but never savvy enough to truly subvert them. 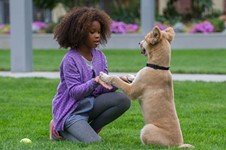