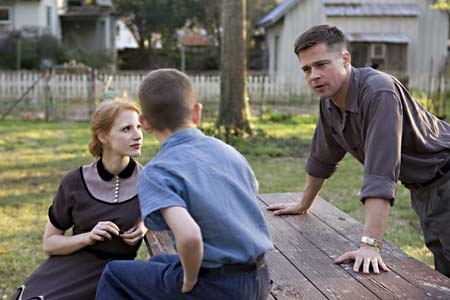 Terrence Malick’s hotly awaited new movie, The Tree of Life, bursts with such unbridled ambition, vision, and sense of purpose that viewers tend to respond with either stunned speechlessness or babbling effusion. The film is the most personal (and dare we say autobiographical) of Malick’s career, yet at the same time it is the most mysterious, abstract, and puzzling of his five feature films. It is also strongly impressionistic, and perceptions of the film can be as variable as the play of light rippling through a tree’s branches. Even the concept of a tree of life is more metaphorical than literal in Malick’s hands. What the filmmaker is trying to capture is a sense of the entirety of human existence, which has roots grounded in the earth, branches that reach ever skyward, and a circumference that gains mass with each passing generation. It’s not a film with a plot as much as it is a film by a former philosophy student – though this particular student possesses an extraordinary eye and an uncanny ability for envisioning human beings as sentient life forms within the natural order. God is a presence in Malick’s world but is not an entity that answers prayers or responds with more than the sound of rustling grass. After a quotation from Job, The Tree of Life opens with a cacophony of whispered prayers swirling through the universe. Meanwhile, a semblance of the big bang and the beginnings of life appear on the screen. Even some stirring dinosaurs are included in Malick’s cosmological invention. Eventually, the film settles into its evocative middle section, which offers us glimpses of the O’Brien family in 1950s Waco, Texas. Pitt and Chastain are Mr. and Mrs. O’Brien, who have no first names and are the parents of three boys, the eldest of whom, Jack (played as a child by McCracken and as an adult by Penn), is the story’s central figure. Throughout his life, Jack is torn by the contradictory pulls of the “way of nature,” which is represented by the father, and the “way of grace,” which is the realm of the mother. The way of nature is the path of order, discipline, sacrifice, and perpetuity, which may have something to do with the glass buildings and skyscrapers where we see the grown Jack, whom we presume has become an architect or some kind of building planner, though that is never spelled out. In fact, Penn’s sequences as the adult Jack are the weakest narrative link in the film. Virtually wordless during these scenes, we observe Jack staring out of windows and appearing like a speck in the cosmos. As the model of grace, Chastain also has little to do but appear beatific and occasionally wash off her bare feet with the garden hose. The concluding section of the film seems to be a fairly conventional portrait of the afterlife, which serves as a fitting bookend to the opening chapters about the beginnings of life. The heart of the film, however, is the Waco section, which splendidly captures a sense of the period and, even more miraculously, does so from the guileless perspective of a child trying to understand the mysteries of his parents. Everything in this part of the drama rings true. Pitt puts his square jaw into the role of the paterfamilias and newcomer McCracken reveals a natural talent as the young Jack. Of course, Malick’s collaborators on The Tree of Life – cinematographer Emmanuel Lubezki, the five editors, composer Alexandre Desplat (whose score blends seamlessly with a vast array of classical music pieces), production designer Jack Fisk, all the special-effects people, and his tireless producers, among many others – have all risen to the filmmaker’s challenge to create something far beyond the ordinary. Even when The Tree of Life does not achieve the heights for which it aims, it soars boldly and fearlessly. 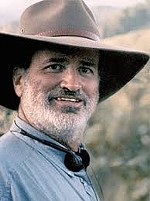 Might 'The Tree of Life' Sprout at Fantastic Fest?
Malick's latest sprouts rumors, including Austin premiere