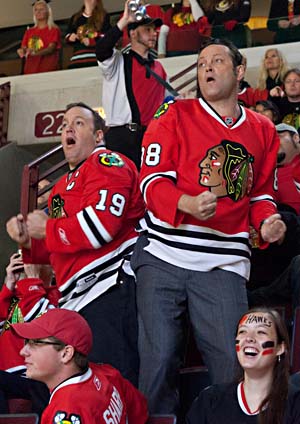 Being lifelong friends can be difficult. Relationships, especially those that have been committed (as the singles say), are tough, lovely work. Marriages are even more fraught, unequally primed for passion or peril or plain, old, doe-eyed deceit. The Dilemma is a facile string of predictable emo on the face of it, but against all odds – including a January opening and a listless ad campaign that practically preordains an unaware audience – Howard surprises with this decidedly honest comedy-melodrama that encapsulates all of the above facets of love and friendship while taking pain to dwell in the real world. I say "surprising" because it's been 10 years since Howard helmed a film with this much heart, at least since 2001's A Beautiful Mind. The Dilemma, ably scripted by Allan Loeb, is being pitched as a romantic comedy with complications, but it's actually considerably more than what it appears to be. Anyone expecting a free-pass date movie should be prepared to discuss weighty emotional issues, or, at the very least, Vaughn's crumbling career and this film's tentative resurrection thereof, after the credits roll. Vaughn plays Ronny, best friend and confidant to the high-strung Nick (James); together, they design greenish electro-car stuff for Detroit, but their company hasn't yet cracked Chrysler. Nick is happily married to Geneva (Ryder), Ronny's been going out with Beth (Connelly) long enough that his gambling addiction is less an inciting incident than a convenient bit of backstory, and together the two couples live a seemingly charmed life. Until Ronny, on the verge of buying that dastardly ring, espies Geneva with someone other than Nick, hence his dilemma: to tell or not to tell, and all that that implies. The film is front-loaded with four strong actors and a minefield of a narrative laced with all sorts of bitter pills. There's comedy, yes, but only so much. It's a helluva balancing act, but Vaughn nails it, and his nicely nuanced everyguy performance is aided by the always-excellent Connelly and a sterling turn from James. Admittedly, The Dilemma at first feels like a lightweight dramedy/romance of no particular heft, but there's an unexpectedly naked honesty surrounding the foursome at its core. This dilemma – and its resolution – feels real and true, even when it's playing things for laughs.