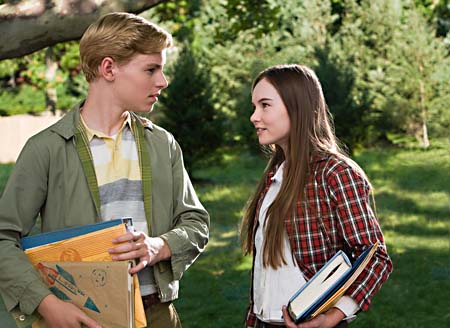 That Flipped works at all is no small wonder, and if that sounds like a backhanded compliment, you're right on the money. So is this: It's Reiner's best film in a decade … but just look at the competition –  The Bucket List, Rumor Has It …, Alex & Emma. In Flipped (based on Wendelin Van Draanen's young-adult novel of the same name), Reiner returns to some of the same elements that defined his 1986 legacy work Stand by Me: a coming-of-age story steeped in small-town, midcentury Americana and accompanied by voiceover narration. Here, there are two young ones on the cusp of that changeover into young adulthood. Juli (Carroll) is a tough but sensitive semiwild child who flips when blond and blue-eyed Bryce (McAuliffe) moves into the house across the street. They're a very calculated study in opposites. She's messy, and he's upright; she's open to new ideas, while he's timid about breaking from the pack; she's artistic, like her father (Quinn), while he elects to take orders from other arbiters of taste. Bryce is entirely unworthy of Juli, but I suppose young women have wasted their sighs and swoons on lesser men since time began. But must we spend half a movie on said lesser man's inner thoughts? The title refers in part to the film's gimmick (taken from the novel) of showing scenes from one child's perspective, then replaying the same action from the other's perspective. Much of the action is so undramatic as to hardly warrant a first viewing, let alone a second, and the film is weighed down by nonstop voiceover. Yet, for so many wrongs, there are certain charms. Carroll, as the single-minded Juli, is an unaffected actress who radiates smarts, and her beamy rapport with Quinn is a touching evocation of fathers and daughters' mutual-appreciation society. Indeed, far more interesting than Juli and Bryce's banal budding love is Reiner and co-scripter Andrew Scheinman's sensitive exploration of how parents shape their children.