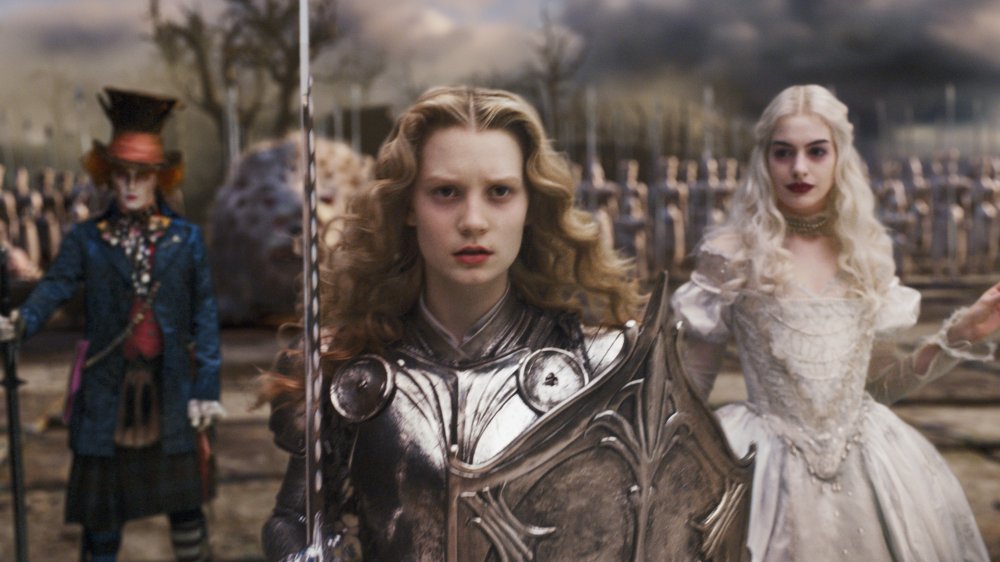 Long gone is Lewis Carroll’s nonsensical idyll: In this topsy-turvy take, Alice (Wasikowska) is 19 and about to be married off to a Victorian prig (Leo Bill). Dodging his very public proposal, Alice chases a rabbit through a topiary garden and down to Wonder, er, make that Underland, as it’s called here. Those suffering from apocalypse fatigue will likely shudder at Alice’s first steps out of the rabbit hole: It’s all dead vegetation, smote spirit, and survivors’ guilt. Turns out that while Alice was away, the Red Queen (Bonham Carter) unleashed holy hell – or coup d’etat – snatching the crown from her sister the White Queen (Hathaway) and deputizing the Knave of Hearts (Glover) to do her bidding (reign of terror, lawn games, etc.). Everybody’s been expecting Alice – it’s been prophesied that she’d return to slay the Red Queen’s favorite beastie, the Jabberwocky (a screeching pterodactyl that looks like what would happen if the original etching of Through the Looking Glass illustrator John Tenniel bedded down with something from Predator). Alice, however, is unconvinced she’s the girl for the job, which means we’re in for a rather rote tale about self-actualization (in this regard, there’s a strong resemblance to screenwriter Linda Woolverton’s earlier Disney work in Beauty and the Beast, The Lion King, and Mulan). Perhaps overtaxed with the outsized expectations inherent to the 3-D format, director Burton (Edward Scissorhands) rushes the entrée into Underland and goes big early – too big, too early – with a violent, incomprehensible chase sequence. The first act is very nearly unbearable, leaden and doomy and generically plotted. Say a little prayer, then, for Depp: His Mad Hatter could have been mere circus-act material, but instead he plays the lunatic hatmaker like William Wallace with PTSD. It works – sometimes transcendently so. The script riffs on the Hatter’s famous preoccupation with “how is a raven like a writing desk?,” and one of Depp’s line readings of that eternal unknowable is downright Shakespearean. Woe, then, to the creative team who OK'd his third-act jig. And so it goes: Every stellar moment within is met with five more clunkers, and tonally, there’s a deeply imbalanced mirth-to-muck ratio. Who would’ve guessed that Burton, a man who’s made a career spelunking for fun in cannibals and corpses, could produce such a joyless film? There are bright spots, certainly – a few of the more comic actors manage to puncture the film’s overall dourness (see Little Britain’s Matt Lucas as Tweedledum and Tweedledee), and the many animals are digitally rendered quite beautifully. But considering what a to-do this massively budgeted entertainment is, that doesn’t add up to much. “Curiouser and curiouser,” indeed.