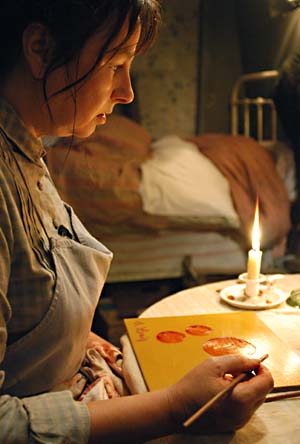 This rapturous, utterly engrossing account of the life of early 20th century French artist Séraphine de Senlis (Moreau, in an impeccably humble yet intellectually ecstatic performance) and her discovery by and association with German art curator Wilhelm Uhde (Tukor), who also happened to be her employer, won six César awards in its native France, and it's easy to see why. From the penniless and drudge-filled life of a homely housecleaner (the backbreaking laboriousness of scrubbing clean Uhde's modest home in the township of Senlis is no trifling matter in either Provost's view or Séraphine’s) to becoming a monetarily patronized cause célèbre and, eventually, a candidate for the madhouse: What's not to love? I'd heard something of Séraphine in my old art-history courses but never explored much further, to my great regret. That probably wouldn't have been the case if I'd had Provost's magnificently moving film as a course guide; Séraphine is a skillful meditation on art and class distinctions, the influences of religion and spirituality on the artist, and the harrowing, often artistically damaging aspects that sudden celebrity can bestow upon an otherwise sidelined personality. (It's hard not to consider Séraphine's eventual mental and artistic collapse, which arrives by way of the newfound fame she receives once she’s "discovered" by Uhde, a precursor to the egregious effects of our present celebrity-or-die culture – Susan Boyle of Britain's Got Talent comes to mind.) The ill-lit intersection of art and sanity has always been a dicey juncture. Séraphine, an outsider artist before the term was invented, is both a cautionary tale for contemporay artists of all and sundry media and a genuinely moving portrait of the artist as a young(ish) scullery maid.