Fincher, the director of Se7en, Fight Club, and Panic Room, switches gears with his new film Zodiac from psychological thrillers to something that more closely resembles a police procedural. Based on Robert Graysmith’s two books about the notorious Zodiac murders that gripped the San Francisco area in the early Seventies, Fincher’s film is nevertheless creepy and uncompromising. The public’s familiarity with the Zodiac’s cryptic, years-long murder spree during which the killer sent taunting letters and ciphers to the area newspapers before turning dormant, automatically turns the plot into a story with few surprises. Furthermore, it’s a crime story in which justice has never been served, making the film one that has no rectifying conclusion – a story arc that cuts against the established grain of Hollywood crime films. Instead, Fincher’s film places its primary focus on the four men whose lives were forever altered by their pursuit of the Zodiac’s identity: two homicide detectives David Toschi (Ruffalo) and William Armstrong (Edwards), San Francisco Chronicle crime reporter Paul Avery (Downey Jr. ), and the paper’s cartoonist Robert Graysmith (Gyllenhaal), who became obsessed with uncovering the Zodiac despite having no occupational duty to the story. By investigating the actions of these men, Zodiac becomes more a story about the task’s inherent frustrations and disappointments rather than an exposé of the serial murderer, although the re-creation of the Zodiac’s assaults are disturbingly lifelike nevertheless. As the case spans four jurisdictions, it becomes increasingly apparent that we are witnessing what complicated criminal investigations were like in the time before the electronic age of fax machines and centralized computer databases. Fincher uses dozens of period pop tunes to help set the period (the opening and closing use of Donovan’s “Hurdy Gurdy Man” is especially creepy) and the excellent DV camerawork by Harris Savides provides the film with a slightly faded appearance that is completely appropriate to the overall tone of the film. The casting couldn’t be better: Zodiac’s panoply of performers all drip with the metaphorical perspiration of men hard at perplexing work. Yet Fincher’s character shorthand is also the film’s biggest problem. We know too little about the psychological makeup of these men to just accept the film’s easy conclusion that the Zodiac case ruined these men’s lives. It’s too simplistic to say that the situation destroyed Graysmith’s marriage when he’s already once-divorced when we first meet him or that Avery slipped irretrievably into his addictions when he’s already a big boozer at the outset. Neither is it sufficient to explain Graysmith’s obsession by merely mentioning that he’s an Eagle Scout and loves puzzles. At 2 1/2 hours, the film is also too long in the telling and too short on suspense. Certainly, it is the most fact-filled film version of the story, yet I’d argue that there are many incidents and characters that could be stripped without hurting the narrative – and, in fact, would improve the film’s tension and comprehensibility. Without due process or a culprit to wrap up the storyline, Zodiac needs a more solid center on which to hang its story. 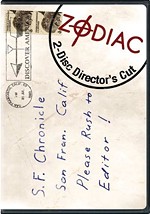 Zodiac: Director's Cut
Spencer Parsons has been waiting for a proper DVD of Fincher's essay on the dorkiness of evil since end titles rolled in the theatre