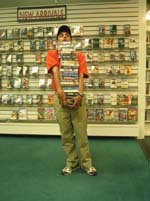 Movies are the perfect sport for the emotionally vulnerable or socially inept. They provide the most accessible (and legal) way to escape your problems. Movie obsession seems, therefore, a ripe and relevant storytelling framework. But Film Geek swallows this concept and chokes on the meal. Instead of offering any insight or (dare I dream?) entertainment, Film Geek presents a socially retarded main character stumbling through a dimwitted plot with a series of painfully unfunny nonjokes. Writer-director Westby refers to this film as his most personal. He must really not like himself. Shot for what looks like the price of a DV tape, the movie quickly offends any true film geek. Malkasian stars as Scotty Pelk, a bug-eyed, video-store clerk with the demeanor of a space alien and the social graces of a robot on methamphetamines. Oh, and he can’t talk about anything except movies and how much he loves them. His encounter with a customer who prefers the nonletterboxed version of Starship Troopers sends him into an aggressive frenzy. After getting fired from his job, he meets Niko (Gannon), a hip and sexy artist who inexplicably takes a brief liking to our annoying hero. Unfolding like a roll of toilet paper, the thin plot consists primarily of watching Scotty annoy people (namely the audience). Movies give us friends and stories and jokes. They raise our blood pressure and our understanding of the world. And what do movies do for Scotty Pelk? Nothing. His understanding of the world equals that of someone who grew up in a closet. Scotty rambles endlessly about the “awesomeness” of Wong Kar-Wai, Martin Scorsese, and Krzysztof Kieslowski (to name a few). But he doesn’t absorb anything of substance from the movies he holds so dear. Westby seems to think that film fanaticism begins and ends with lists of names. Good movies are awesome, yes, but not just because they’re awesome. Movies inspire something real in our bodies, our minds, and our spirits. Unfortunately, this portrayal of a two-dimensional character with an annoyingly vacuous obsession is almost enough to dissuade anyone from ever watching another movie again, beginning with this one.