pdf
ON THE COVER:
Tell It Like It Is
features 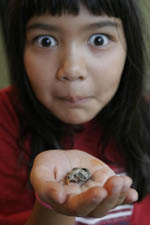 Are the Waters Rising at Bouldin Creek?

After more than a month of searching for the aspiring singer / songwriter, sheriff's investigators charge victim's aunt and uncle with her murder

Despite what you may have heard from anti-immigration types about foreign freeloaders taking our jobs and our services without chipping into the national kitty, an increasing number of undocumented immigrants pay taxes.

For many in Austin's immigrant community, the hope that swelled from the massive April 10 immigrant rights protests has turned to fear

Korea Garden's tempting menu is best tested one dish at a time, and most pass with flying colors

Awards, accolades, and openings give Austin something to celebrate

A world-renowned wine master and her chef show what Spain is made of.
music Cyril Neville holds nothing back

Rap's rise at the Back Room, Mother Truckers take over South Congress, Austin film crew documents the tenuous fate of New Orleans and Jazzfest, and a year's worth of sexy local ladies

Who Are Your Customers?

Taking aim at Banff and Blowin' Up a Spot

Akeelah and the Bee

This story about a girl from the ghetto who wins the national spelling bee has lofty if sometimes unfulfilled goals, but is a rewarding tale nevertheless.

Unfortunately, this low-budget portrait of a socially inept film-store geek is annoyingly two-dimensional, and the film's paper-thin plot and flat jokes don't help either.

Steve Buscemi directs this story about a lovable loser who moves back in with his off-kilter family in Indiana.

Bring It On's scribe Jessica Bendinger writes and directs this teen movie set in the world of competitive gymnastics, and features leotard-clad girls who learn to stick together to fight injustice.

United 93 is a sober, humanistic portrait of America’s literal “first responders,” who in an instant were forced to wrap their heads around a new, unfathomable reality.
arts & culture

On the eve of its long-awaited grand opening, UT's Blanton Museum gets its art in the right place

Eastside gallery Okay Mountain opens strong with "Repressed Burial Fantasy," featuring new works by Jason Villegas that gently remind us we are all meat for a bigger creature at some point

With a program of large-scale video installations called Luminocity, some UT students are turning buildings, walkways, walls, and alleys into movie screens

For Austin's sterling choral ensemble Conspirare, the first few months of 2006 has seen concerts here and far away and the release of a new and most comforting CD

The Rude Mechs' 'Decameron Day 7:REVENGE!' is a meditation on vengeance refracted through the lens of ghost stories, how-to guides, 'Star Wars,' and soap operas

In the Zachary Scott Theatre Center staging of 'The Exonerated,' tales of people wrongfully imprisoned on death row draw us deeply into a world of injustice

'Testsite 06.1 ~ The Burden of Decision: Two Exercises in Collaboration'

'Testsite 06.1 ~ The Burden of Decision' is an investigation of artistic collaboration with a strong current of Freudian repression and struggle running below the surface
columns

Three fronts of transformative change in U.S. society: the allowance of Christian proselytizing in the U.S. Air Force Academy, Halliburton's receipt of government contracts to build detention centers for Homeland Security, and the rise of the Latino electorate

Why are those sticky labels on fruits and veggies, and are they harmful if swallowed?

The nine li'l cabins of the Blanco Settlement offer rocking chairs, Frisbee golf, and a Jacuzzi among other amenities for your vacationing pleasure