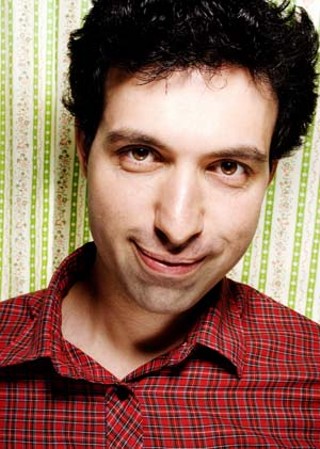 In the kitchen of filmmaker Alex Karpovsky's East Austin sublet, he makes tea and talks about his former hero. "I didn't grow up wanting to make movies. I wanted to be Andy Kaufman." He pauses, his back turned, as he bends over the sink, "Is this okay to do? I hope I'm not being rude, doing chores during the interview." On the contrary, Karpovsky comes across as funny, self-consciously awkward, and disarmingly intelligent while he talks about filmmaking, genre-bending, and why he wanted to make a movie about a bird.

An academic-turned-actor-turned-filmmaker, Karpovsky's history includes a master's degree in social anthropology from the University of Oxford and a microbudget first feature, The Hole Story, which had a healthy festival run and a small theatrical release. After relocating to Austin (from New York) in July of 2007 to act in the as-yet-untitled third feature from writer/director Andrew Bujalski (Mutual Appreciation), Karpovsky is back behind the camera with his latest feature, Woodpecker.

I first saw the film in January at an Austin Film Society Narratives in Progress screening and found myself in awe of this tale about an amateur birdwatcher on a desperate mission. A highly entertaining, character-driven story, the film blends tragedy with comedy, truth with fiction, pathos with absurdity, and the result will have you simultaneously laughing and performing mental gymnastics to unravel its many layers. Not unlike the work of his early idol, Karpovsky's film explores ideas of authenticity. "Andy [Kaufman] really liked to blur this notion of reality and use it for comedic effect, and that's something I'm still incredibly interested in. Woodpecker is not a documentary – not in my eyes anyway; some people might disagree. Some people have already disagreed." He pauses, smiling, "But it's not a narrative either."

First, the truth: The ivory-billed woodpecker was declared extinct in the 1940s, but in 2005 reports of sightings in rural Arkansas surfaced within the birding community. Then, the fiction: Amateur birder and poet Johnny Neander (played with heartbreaking hilarity by actor Jon Hyrns) embarks on a quest to find the elusive woodpecker. Karpovsky wrote his screenplay around the existing mystery, and as a result, nearly everyone in the movie, except for the main character, plays themselves. Explains Karpovsky: "The backdrop is entirely real; the mayor is real; the sheriff is real; the bird is real; the town is real. One of the things that was interesting to me about this project was to infuse a fictitious character and a preconceived story into an entirely real setting."

In reality, heated debates ensued regarding the existence of the bird. And as the woodpecker itself lives somewhere between fact and fiction, so does the film. Says Karpovsky, "Some people think [the bird] is real, some people don't, and I'd like that ambiguity to be related to the style of the film itself." He pauses, aware of the headiness of his statements. "That's very theoretical, and I don't want people to be whipping out charts and graphs during the movie. I want that to be in the background."

Production for the film, which occurred over 12 straight days in Arkansas with a crew of four, was profoundly microbudget. Says Karpovsky, "There's a lot of freedom in working ultralow budget, and it's also fun, and you don't have to answer to anyone, and you can do the movie the way you want, and you can also take chances with your stories and with your styles and kind of experiment. All of that is great, and I hope that those freedoms will never go away." He pauses with a knowing smile. "They probably will."

When we last spoke, Karpovsky was returning to Arkansas for some last-minute shooting before finishing the film just in time for its world premiere. As he prepares to release his innovative film into the world, discussion always circles back to context. Says Karpovsky, "The woodpecker is flying in this strange murky twilight between truth and fiction, and I hope the movie does as well, and I hope it does in a way that's not annoying or artsy, but in a way that's effective, organic, and funny. Those are the goals. So, it's like a hybrid existential tragi-comedy." He pauses. "That's pretty clunky. I don't want to get too theoretical or too analytical about this stuff because I want it to be funny, and I think you can overthink funny." 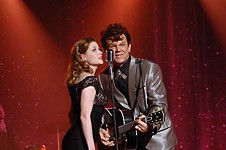 Walk Hard: The Dewey Cox Story
Taking cues from Ray and Walk the Line, this comedy biopic spans 70 years in the life of its hero, the fictional music legend Dewey Cox.