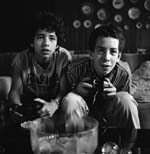 When you're 14 and stuck at home all day with your best friend, what do you do? Let's say you live in a Mexico City housing project, and the electricity is intermittent, so Xbox (though you have one) is out. The phone still works, so Flama (Miranda) and Moko (Elizondo) order pizza, then torment the deliveryman (Arreola), who's having an early midlife crisis. Meanwhile 16-year-old neighbor Rita (Perea) needs their oven to bake a cake. A study in aimlessness, the film comprises Jarmuschy black-and-white static long takes with elements in motion meandering through the frame. Like the film's international benefactor, Alfonso Cuarón, writer-director Eimbcke is an avid visualist, but Duck Season devotes itself to youthful inertia; as its characters struggle to achieve and maintain momentum, the camera stays desperately trapped in its one interior location, literally climbing the walls while a dripping bathroom faucet beats a relentless tattoo. In other words, the movie isn't the teenage laugh riot its summary suggests. It's squirmy and restless. Its guiding metaphor is an image of migrating ducks – when the lead duck tires, we are told, it falls back to the rear of its formation and the second duck takes over. If there's any answer to the boys' disaffection – Flam's parents are divorcing bitterly, and Moko is realizing that he's gay – it comes in the form of Rita's pot brownies. But even as the foursome inevitably bonds in their shared plight of purposelessness, they leave behind messy bowls, broken bric-a-brac, and 300 half-eaten chocolates. Eimbcke drives his point home with a gorgeous opening montage of urban blight (if such a thing can be said to exist, it does here): a torn and forgotten basketball net, a "children at play" sign in a parking lot strewn with weeds. And behind the concrete walls of the grim high-rises bordered by freeways and power lines, kids are compartmentalized into little boxes of boredom eight stories up. Not in recent memory has a movie so short – 90 minutes on the nose – been so stagnant and stubbornly slow to build. And that's exactly the point. (Ivan Thompson will be present for a Q&A following the 4:30 and 7:30pm shows Friday-Sunday, and will be selling copies of his book Cowboy Cupid (Mail Order Brides and Other Tales from the Desert South) in the lobby.) 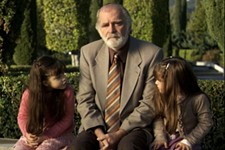 Nora's Will
This Mexican award winner is a melodrama with a darkly comic streak about a Jewish woman who masterminds her family's lives even after her death.