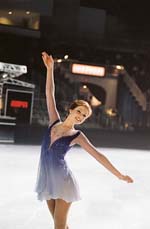 The misleading title, I suspect, is intended to trigger a Pavlovian effect in little girls – in lieu of drooling, their eyes sparkling wide with visions of tiaras and poofy skirts. Mercifully, the frosted icing-icky title bears little relation to the film’s actual content. Ice Princess is in fact a Cinderella story – and we’re talking of the Dickie V. sports variety, not a Brothers Grimm or Uncle Walt fairy tale. True, Disney is the distributor behind this tween-targeted figure-skating film, but if the House the Mouse Built hasn’t exactly gone hip, it is exhibiting a fairly progressive bent in the stories it’s choosing to tell lately. (Exhibit B: Its upcoming Herbie remake has been refashioned as a Lindsay Lohan vehicle, in which the plucky heroine must prove she can ride with NASCAR’s all-boys club.) This refreshingly femme-centric tale charts the (improbably) meteoric rise of Casey Carlyle (Trachtenberg), a high school senior and self-proclaimed science geek who discovers she has a real, if raw, talent for figure skating. That’s news to her single mom (Cusack), who has very different dreams for her daughter (they include a prized physics scholarship and matriculation to Harvard). On the other end of the fence is Casey’s glamorous new coach, Tina Harwood (Cattrall), who encourages Casey to compete in Olympic pretrials and is a single mother herself. One would be hard-pressed to find any fault in Ice Princess’ message – how many tween-targeted films equally advocate physics, feminism, and athleticism? – although Casey’s mom might cringe at the moment her gawky daughter recognizes her own beauty by packing on make-up. The most intriguing conflict is in fact the tug-of-war between the two mothers (something Cusack quite neatly boils down to, "no matter how old you get, you still hate the prom queen"). Parents, at least, will enjoy that element of the story, but kids will be glad that it’s Casey who takes center stage. Her only flaw appears to be that she has none, but no matter; Trachtenberg (Harriet the Spy) manages to overcome her character’s perfectness by being a warm, ingratiating presence. Unlike Casey, Ice Princess is something slightly more pockmarked: Too many forgettably peppy/poppy songs, an oversimplistic script (by Meg Cabot and Hadley Davis) lacking in laughs, and an increasingly frantic camera style that bizarrely begins to imitate that of a network investigative drama. Director Fywell also directed the superior I Capture the Castle; that film managed a more nuanced, if romantic, portrait of young womanhood. Fywell’s latest is about as subtle as the eyeliner-and-lipstick war paint these figure skaters slather on preperformance, but some lessons – like the importance of education, athleticism, and self-confidence – deserve to be shouted, however crudely. 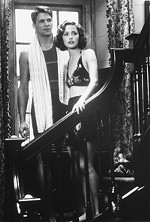