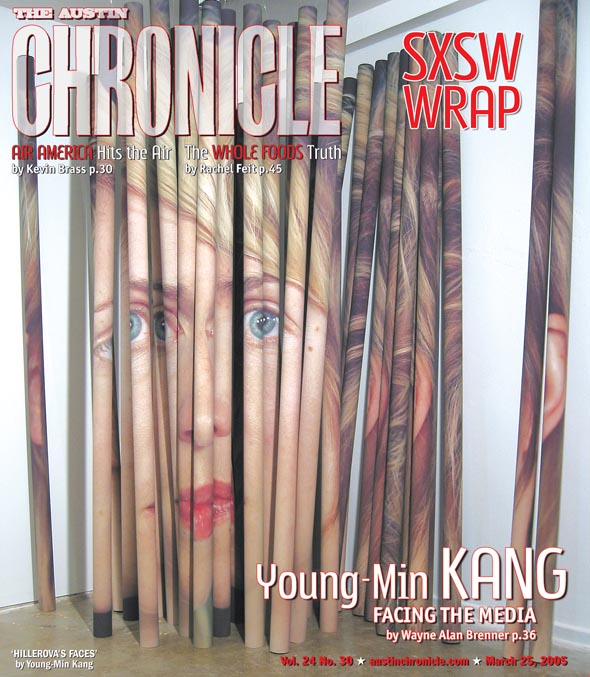 pdf
ON THE COVER:
Facing the Media
news

Air America – Who is That?

When Is a Tax Not a Tax? Ask the GOP.

The House tax bill passes, but will it actually help Texas schools?

The Rich Get Richer

Death penalty proponents trot out predictable arguments against it

Judge tells bar owners they filed in the wrong court

State GOP can't keep members on the farm ... or out of casinos

Did you know an educated Chinaman knows 2,000 symbols and can draw them?

Attempts at decriminalizing, or at least lessening punishment, in Texas and elsewhere

Who's Funding the Voucher Campaign?

Point Austin: The Fire This Time

In their rush to reach out to the Eastside, city officials get burned With the opening of the new Whole Foods, the grocery business in Austin and elsewhere is at its apex

Everything you need to know about Easter Sunday in Austin

The Shape of Things to Come Panel

SXSW 2005 plows a furrow of beer cans, cocaine, and music through downtown Austin

SXSW might be over and done with, but our coverage isn't quite yet: reviews and photos

Giving It All Away

The Life and Hard Times of Guy Terrifico

Enron: The Smartest Guy in the Room

A reader's letter got me to thinking ...

Twentieth Century and Bringing Up Baby

Getting to the gist of screwball's golden age

While Callas Forever seems sincere in its attempt to pay tribute to the world’s most famous opera singer, it unwittingly disserves her in its bizarre wish-fantasy about resurrecting her voice onscreen.

This refreshingly femme-centric tale advocates on behalf of physics, feminism, and athleticism.

A sweet, emotionally complex film about faith, charity, and growing up is not what most people would have expected from Trainspotting's Danny Boyle, but this new movie is unmistakably his.

No medals will be awarded for this Sandra Bullock follow-up, although the actress proves herself an ever-game comic actress.

Narrative listlessness and a lack of scares makes this mother-and-son reunion a shabby affair.

Schultze Gets the Blues

The life of a retired German miner and accordion player is spurred toward change by the sound of zydeco music.

Who is Young-Min Kang? That's what he wants to know.

Christo and Jeanne-Claude are coming to Austin for the Austin Museum of Art, which has just gotten a splashy new look

A second life for 'Death of a Cat,' a new arts commissioner from the tourism bureau, and a West Coast trip for Kathy Dunn Hamrick Dance

The Vortex Repertory Company's 'Sleeping Beauty' shows the company in a playful mood, delivering a musical adaptation that is fanciful, lighthearted, and disarmingly sweet

'Between You and Me'

Finding peace in the wonderful chaos of SXSW

Stephen in overalls?? Can you see it? Billy Jack can ...

What usually happens with chronic hepatitis C infection, and can anything be done nutritionally to improve the outcome?

BY LUKE ELLIS AND LARA WAGNER

Dan Blocker of O'Donnell, Texas, was Hoss Cartwright on the television show 'Bonanza' and lives on through reruns and in a museum and small park in his hometown in the Panhandle