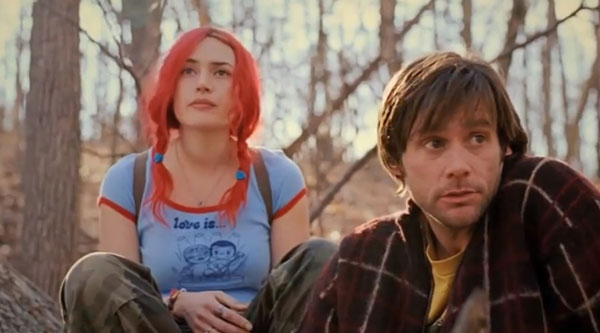 Eternal Sunshine of the Spotless Mind

Oftentimes, love can lead to regret. In the best-case scenario, we learn from the experience and move on. But what if it were possible to eliminate the regret – and not only that, but extinguish the memory altogether? That’s the wild premise on which Eternal Sunshine of the Spotless Mind is predicated. With props to Alexander Pope, the poet from whom this movie’s entrancing title derives, "eternal sunshine" is what is offered by Dr. Mierzwiak (Wilkinson) through his medical practice called Lacuna. He provides solace to the brokenhearted through a device he’s invented, which, when placed on the head while sleeping and modulated by a trained engineer, can pinpoint and eliminate preselected memories. It’s presented in the movie very nonscientifically – in fact, the doctor’s contraption looks like an upside-down soup tureen with a few attached electrodes on top. We’re in the alterna-world of screenwriter Charlie Kaufman here, and we accept the memory-erasing thingamajig just as we accepted the seventh-and-a-half floor in his script for Being John Malkovich or his maybe-he’s-there-or-maybe-he’s-not brother in Adaptation. This film is the second collaboration between Kaufman and director Gondry, and it’s a tremendous improvement over their earlier Human Nature. This time, all the pieces jell and sustain the storyline through to the end. In this season of abundance for amnesiac romances, Eternal Sunshine – with its laughs and its weirdness and its contemplation of some of the big issues regarding memory and identity – is the hands-down winner. Eternal Sunshine tells the story of the beginning and dissolution of the romance between Joel (Carrey) and Clementine (Winslet) – but not necessarily in that order. The structure of the movie assembles scenes (or maybe memories) from different moments of their relationship, some of which are prememory elimination and some post. At first, the method is strangely confusing, but soon the pieces begin amounting to something. Joel is an average-seeming young man, depressed by the failure of his most recent relationship and schlumpily proceeding through the paces of his life. Then, one day he spontaneously ditches work and hops the train to Montauk on the far end of Long Island, and there he meets Clementine. Although he notices this young woman with the blue-dyed hair (the changing colors of Clementine’s hair help to keep track of the movie’s constant time shifts), he does nothing about it until she starts a conversation with him on the train. The romance that blossoms is of the "opposites attract" variety: She provides the color to his pallid existence, and he offers a stability that keeps her from spinning out of control. But after a point, Clementine breaks up with Joel, and decides to have her memories of him erased at Lacuna. When Joel discovers what she has done, he decides to have the same procedure performed, and it’s here that things go amiss. The doctor’s strange technicians come to Joel’s apartment to hook him up to the machinery and erase his memories while he sleeps. Ruffalo and Wood play the two weird med techs, one a distractible goofball and the other a surreptitious creep, and they are joined by the doctor’s perky office assistant (Dunst). The performances of all these secondary characters are spectacularly brilliant, and the central performances of Carrey and Winslet shine even brighter. These two actors engage in something of a role reversal, Carrey taking the low-key, reactive role and Winslet playing the wild and kinetic character. Eternal Sunshine is the best work these two have delivered since early in each of their careers. Kudos must also go to cinematographer Ellen Kuras and editor Valdís Óskarsdóttir, whose deft work adds so much to the seamlessness of this project. Eternal Sunshine of the Spotless Mind is a delightful little wormhole that takes us on a journey to another dimension of consciousness. See interview with Charlie Kaufman in this week's Screens section.