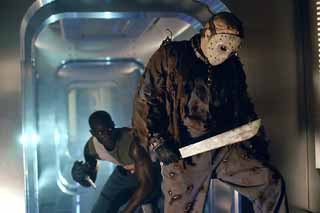 (Excerpt of an interview with Friday the 13th boogeyman Jason Voorhees from Scott Bowles' recent autobiography, Freaks Like Me: Confessions of a Movie Psycho). SB: So tell me about your latest film, Jason X. JV: (rolls good eyeball) When New Line Cinema offered me the unique opportunity to star in Jason X, I was sooooooo thrilled. (in a more serious tone) Actually, at the time, I was really frustrated about how I had become typecast in the industry. I wanted to flex my acting muscles, so I had asked my agent to talk up a remake of The Phantom of the Opera, The Elephant Man, The Hunchback of Notre Dame, anything that called for a really ugly guy. Hey, Arnold Schwarzenegger started off as a human killing machine, and then got good parts in Twins and Eraser. Why couldn't I do the same? But all of that effort went nowhere. And I was so sick of wearing that damn hockey mask -- it's terrible for your skin, my face was always breaking out -- and that background music was starting to drive me insane. It sounds like a synthesizer on a Wurlitzer electric organ being unplugged. But I started to get some therapy and to work on my anger issues, and then Michael Myers and I formed a support group. After that, I finally agreed to do the movie. SB: What was the script like? JV: Well, it had a little originality, unlike the other sequels, but not much. The story had me cryogenically frozen, and I end up defrosting on a spaceship in the year 2455. But even with this new angle, it was the same old crap, for the tenth time. SB: And how did that, uh, make you feel? JV: (getting a little agitated, starts to absentmindedly play with machete) V-e-r-y a-n-g-r-y, all over again. It made me want to disembowel, decapitate, skewer, stab, spear, smash, slice, and mutilate people. (pausing) Which is essentially what I do in the movie. SB: How did you feel about your performance? JV: What the hell are you talking about? I run around for the entire two hours and annihilate the entire cast of the movie, one by one. That's it. I mean, what's my motivation? Nothing I learned in Stella Adler's acting class works anymore. And, as usual, I don't have one word of dialogue, not even a grunt. Freddy Krueger, he gets to say all kinds of witty things before he kills someone, but me, nothing. God, I hate that bastard. SB: Any babes in Jason X? JV: Oh, sure. And they all dress like Christina Aguilerra, you know, very über-slutty. Of course, most of the cast is really horny, which means I have to kill them. (chuckling) Just like Paul Lynde said, "What's the matter with kids today?" (with sadness in his voice) My shrink says it's all very Freudian. SB: What does the future hold for Jason Voorhees? JV: (sarcastically) What do you think, Mr. Bowles? A guest shot on Friends? Or maybe the next Merchant-Ivory movie? (almost hysterically) There is no future for Jason Voorhees, I'm afraid. I'm doomed! (after a pause) Hey, Mr. Bowles, how would you like to be in my next movie?