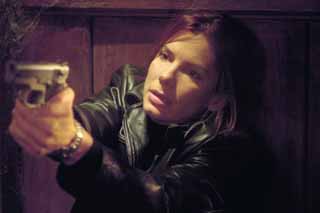 Personal accountability is all well and good, but if I were in Barbet Schroeder's Davanzatis, I'd invoke the Alan Smithee pseudonym a thousand times over before taking the rap for this jack-legged, mindlessly kludged-together example of formula filmmaking at its worst. As the owner of a strong résumé including Barfly and Reversal of Fortune, Schroeder is a proven director who surely doesn't need to be reminded that movies are more than just potluck stews of market-tested “elements.” And let's be charitable here: All of us have done things for money that we'd just as soon forget. Still, even in the most prosaic work-for-hire situations, there's an assumption of at least minimal quality control. So why didn't someone (Schroeder? Executive Producer Bullock? A film-literate dolly grip?) chime in with the observation that it's nuts to even attempt a fusion of icy, cerebral Hitchcock homage with the emotional and stylistic floridness of Se7en and Kiss the Girls? The basic story is probably most amenable to the straight-up Hitchcockian approach. We open at a murder scene, where a woman's mutilated body has been dumped in a creek bed. Hotshot forensics detective Cassie Mayweather (Bullock) and her partner Sam Kennedy (Chaplin) quickly focus upon a pair of rich-brat high schoolers Justin and Richard (Pitt and Gosling), who seem to actively court suspicion, even as all material evidence points elsewhere. The cops' hunch is accurate. As with Hitch's classic Rope, the culprits' identity is not in doubt; the drama proceeds from the perpetrators' struggle to maintain a united front as their scheme starts to unravel. Meanwhile, emotional basket case Cassie and level-headed Sam are lurching forward in their investigation -- she with dazzling flashes of intuition, he with shoe leather and dogged, old-school police work. The viewers' sense of watching two different, profoundly mismatched movies comes not from any fundamental conflict between the major plotlines but rather from the bizarre juxtaposition of style elements. Our killers are supposedly acting upon some high-minded Nietzchean pretense of intellectual privilege, yet their plotting is done in an abandoned mansion filled with candles and other quasi-occultist bric-a-brac. Why? Well, much like the heavy metal blasting from Richard's car stereo and the senseless chase scene in the murderers' shadowy lair, those candles are there just for creepy atmosphere and satisfaction of genre expectations. A lot of Murder by Numbers, in fact, seems thrown in Just Because, with no evident consideration of logic or plausibility. A goofball high school janitor with a vicious pet baboon in his garage? Cool! A large secret room in one of the killers' family home, seemingly unknown even to his parents? Why the hell not? Just as intrusive is the inconsistent presentation of Bullock's character. It's not so much that Bullock's performance is egregiously lacking any technical sense (though it now seems likely that her one-line inscription in the movie-star pantheon will be something along the lines of “Well, she never embarrassed herself'). Instead, Schroeder appears unwilling to let his meal-ticket star be presented as the thoroughly unlikable character the script suggests. Interspersed with moments of intensely dysfunctional behavior, he`ll snap to a full-frame close-up evoking the sweetly radiant Sandy of While You Were Sleeping. This is product placement, just as blatant as the Krispy Kreme donuts in the opening scene and with even less dramatic justification. And, in context, it's utterly, dismayingly typical. 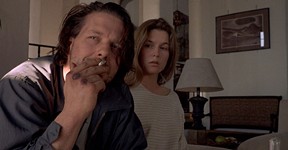