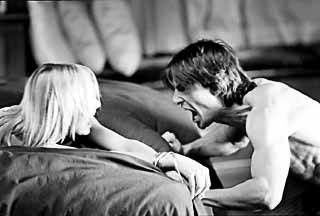 When I first heard that Cameron Crowe was planning a remake of Alejandro Amenábar's 1997 film Abre los Ojos (Open Your Eyes), I thought it was an odd choice for him. At the time, the director had just released the rock & roll pseudo-autobiographic Almost Famous and was best known for either the sporting-life love story Jerry Maguire or the teenage classic Say Anything, depending on how old you were at the time. Amenábar's film, which netted a critical ruckus of its own when it was released, is a freakish love story in its own right, but that's where the director's thematic proclivities ended. The story of wealthy young playboy César, who finds true love in the arms of a girl named Sofia only to lose it -- maybe -- when a jealous ex commits suicide by driving her car off a bridge with him along for the ride, spiraled through a Möbius strip of murder mystery, horror, and ultimately science fiction, before coming to rest with a dull clatter where it began, in the dark, with a sibilant female voice whispering “Abre los ojos.” Amenábar, who more recently directed Cruise's own ex, Nicole Kidman, in this summer's excellent ghost story The Others, caught just about everyone's eye with the earlier film, and triggered more than a few conversations on the nature of dreams, love, and whatever else cropped up after a double slug of post-screening espressos. Certainly he caught the attention of Crowe, who has remade the film nearly note-for-note, right down to casting the winsome Penélope Cruz in the same role, as Cruise's love Sofia. Both versions were written by Amenábar and Mateo Gil, who have left whole passages of dialogue intact (albeit in English), and the resulting film, while powerful and sure to be the holiday film season's most unique love story, is different in several regards. Most obvious to fans of the original, and not at all surprising considering Crowe's consistently rock & roll overtones, is the replacement of the original's traditional orchestral score with a non-stop barrage of pop tunes and rockers that runs the gamut from Sir Paul McCartney to Radiohead, and from the Beach Boys to Spiritualized. There's barely a quiet moment in Vanilla Sky that isn't interrupted -- and often manhandled -- by a sudden sonic outburst from the Dolbys. That Crowe is using these many, many songs and song snippets to underscore and echo all manner of plot movements is fine, but it's often less a soundtrack than a soundwash, almost to the degree that Oliver Stone parlayed Trent Reznor's musical free-for-all in Natural Born Killers. The whole film, in fact, has been Americanized to the core, which is not necessarily a bad thing at all. In the wake of the aforementioned automobile wreck, Cruise's character David (né César), a man who until this point has clearly relied on his megawatt smile and hunky good looks to coast through life with the aid of an equally megawatt trust fund, is horribly disfigured; he's terrified that the world -- and more importantly the dreamy Sofia -- will reject his new, broken self, and that becomes one of the core pillars of the film's theme. It's impossible not to compare the character to Cruise's own blinding star power, and the comparison unleashes a whole new way to view the film. Both Cruz and Cameron Diaz (who plays the jealous ex) are suitably gorgeous and, yes, creepy. But it's Crowe's assured if often over-the-top direction (coupled with Amenábar and Gil's script) that makes Vanilla Sky a success. With plenty of big ideas lurking just out of sight behind John Toll's lush, intentionally surrealistic cinematography, it's a film that you can take home and chew over later, both abrasive in its loudness and reflective in its fleeting, feminine moments of silence. Well done.