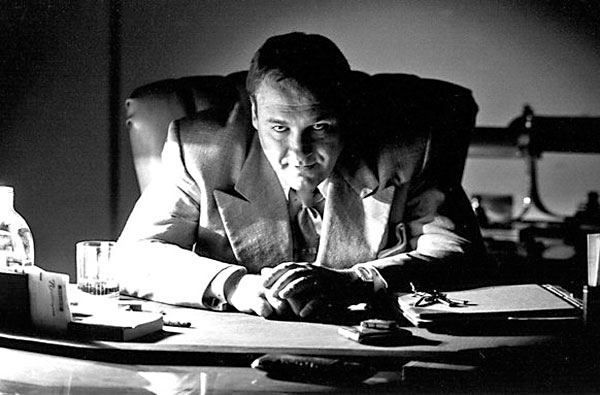 The Man Who Wasn't There

The Man Who Wasn't There is the best adaptation of James M. Cain's gritty noir hellscapes as I've ever seen, and never mind that Cain had nothing to do with it. Shot on color film and then processed into stark-as-nightmares black-and-white by cinematographer Roger Deakins, this is the most visually striking of all the Coen Brothers' films to date. Blacks as dark as midnight collide with rich grays and subtle variations of shading, imbuing the whole film with the kind of psychological chiaroscuro not seen since the heyday of film noir, and before that, German film expressionists such as Lang and Murnau. It's that beautiful. The story, too, is rife with the Coens' ripe ambivalence, a black seriocomic opera of fouled-up American dreams, and a meditation on ambivalence that is itself at times as ambiguous as the emotional meanderings of its protagonist, the small-town barber Ed Crane (Thornton), a chain-smoking, taciturn chimney of a man who deduces that his wife Doris (McDormand) is playing the late-night fiddle-dee-dee with her boss, Big Dave (Gandolfini), and then does nothing for a long time. Eventually, blackmail crosses Ed's frame of reference (it's 1949, and blackmail was, to judge from other noir films of the time, very, very in), and before you can say “John Garfield,” Big Dave is now Big Dead Dave, Doris is in jail, and poor Ed is obsessing over a teenage piano prodigy with an animated sex drive. Of course, it wouldn't be a Coen Brothers film without an appearance from pudgy squawker Jon Polito, who arrives here as traveling salesman Creighton Tolliver, a fellow with a greasy hairpiece and a dream (“Dry cleaning! Think of it!”), and who wants to cut Ed in on a piece of the proverbial pie. Tony Shalhoub pops up as gustatory attorney Freddy Riendenschneider, too, to add flavor to the Coens' already overpacked mix, and Michael Badalucco is one long running gag as Ed's boss-in-snips Frank, who yammers on, endlessly debating the finer points of not very much at all. The film belongs to Thornton, completely and without reservation. With Ed Crane, he has created a character who is almost pure shadow, the archetypal “common man” who is so common that he threatens to cease existing at all. Thornton's barely there take on Ed is excruciatingly subtle; even when he's feeding us information in the film's Forties-era voiceover, Ed sounds as though he's about to drift off to sleep, or the nearest bar, or somewhere, anywhere, but where he actually is. Which, by the way, is the sleepy little burg of Santa Rosa, California, which fans of Thornton Wilder and Alfred Hitchcock will recognize as home base to Shadow of a Doubt's perverse Uncle Charlie. The Coens often have the complaint leveled at them that their films don't take things very seriously, and the same can be said of The Man Who Wasn't There. Despite the semi-grim subject matter, there's always a grin -- a smirk, really -- just out of sight in the background, that lends the whole affair a preciousness that detracts slightly from the film's weighty visuals and sordid tone. Still, it's the best-looking film of the year, hands down, and Thornton is dazzling, a dull diamond in the gutter rough.