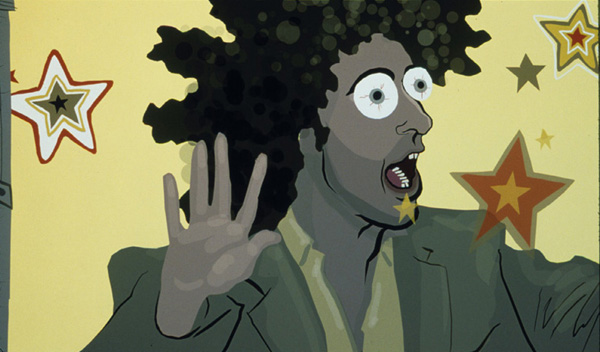 Early on in Waking Life, a character announces -- maybe even warns -- that “this is absolutely the most exciting time we could have possibly hoped to be alive.” One of two dozen eminently quotable lines in the film, that single, tossed-off sentence nails down the essence of Waking Life: that this time, this moment -- any moment, so long as you're in it -- is the most thrilling moment you could ever hope to be in ... so don't blow it. It's a statement that makes you think: If nothing else -- and there is so much else -- Waking Life is a film that makes you think. Linklater initially shot the piece on digital video, mostly in Austin, then handed it over to art director Bob Sabiston and a team of 30 animators, who then used a revolutionary software program designed by Sabiston that enabled them to essentially paint over frames. The result is startlingly lifelike in its ability to mimic the realness of motion, to capture the nuances that make us human and not the product of Pixar. But then, the animation is also raucously surreal -- the head of an academic discussing quantum physics morphs into a gear with glasses, another man has stars erupting from his hair and mouth, and even, yes, has stars in his eyes. Because the individual talents and styles of 30 different artists are on display, the animation can veer disorientingly, exhilaratingly, from photorealistic to cartoonish to angular minimalist. Waking Life is perhaps the most beautifully realized melding of words and pictures yet: the pictures illuminating what's behind the words, infusing the film with a mood and milieu normally reserved only for our imagination -- or dreams. The pictures, then, are brilliant. The words -- of which there are many -- aren't always as successful. The film takes place entirely in the dreams of a central, unnamed character (played by Wiley Wiggins) who ambles from conversation to conversation (a narrative device lifted from Linklater's 1991 film, Slacker). The dreamscape consists of a string of vignettes, featuring actors (Ethan Hawke, Julie Delpy, Adam Goldberg) and non-actors, many of whom are locals. They confine themselves mostly to talk of dreams, sleeping and otherwise: the ability to control dreams, reality vs. unreality, human interaction, and other heady musings. The premise -- that everything within is a dream -- gives the filmmakers too much leeway to toss off traditional narrative for something distinctly more choppy and too given to speechifying. (It's also bound to give a few of us mere mortals some dream-inadequacy complexes: I don't remember anybody sounding half as smart in my nocturnal jaunts.) Some vignettes work better than others. Some are terrifically funny, others unsettling -- the tone turns darker, even sinister, as Wiggins' character begins to wonder if maybe he's not dreaming, but dead. A few are completely inaccessible on first viewing; many of the dialogues demand a good deal of concentration, something that is not always easy to give when there are such bewildering images on display. But mostly Waking Life is stirring -- a motivational, metaphysical head trip. Sure, sometimes it stumbles over its far-reaching ambitions, occasionally grates like an Intro to Philosophy discussion, where all the kids clad in black try to outsmart each other. It won't appeal to anyone not in the mood for talking heads waxing philosophic about waking, dreaming, André Bazin, and the byzantine path the meaning of a word takes from one person to the next. But, by god, those talking heads are made of apoplectic reds and melancholic black and blues, and they can float, shape-shift into cogs and wheels, explode into stars, or dissipate into a cloud. The pictures are gorgeous, and the words, well, if you listen hard enough, the words say exactly what one needs to hear: that is, to wake up and live.