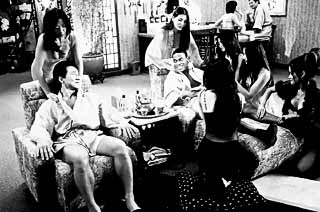 Summertime popcorn pictures don't get much goofier than this silly sequel, which is everything you'd expect and nothing you wouldn't -- save, perhaps, for the welcome (if perplexing) appearance of powerhouse actress Zhang Ziyi (Crouching Tiger, Hidden Dragon) as a Triad heavy. Director Ratner isn't tinkering with the formula that made 1998's Rush Hour a $150 million crowd-pleaser: Two parts interracial buddy hijinks, one part pedestrian police procedural, one part gleefully racist jokes (“I'll bitch-slap you back to Bangkok!”), and one part martial-arts actioner, with dashes of fast cars, hip-hop, and supermodelesque eye candy. Periodically, something combustible explodes, and the leads will lip-synch along with the soundtrack, though not necessarily in that order. In between these episodes, the story follows the law-enforcement misadventures of mismatched buddies Lee (Chan) and Carter (Tucker), who reunite in Hong Kong in time for good times and “mu shu.” But when one of the aforementioned explosions rocks the American embassy, the pair find themselves chasing a reptilian Triad don (Lone) with a secret from Lee's past, a zillionaire American industrialist from Central Casting (King), and a shady lady (Sanchez) who delivers an expository speech in a black Wonderbra and tap pants. The script (by Jeff Nathanson, late of the estimable Speed 2: Cruise Control) is perfunctory enough to have been generated by the Plot-o-Matic 3000. There's an infuriating bit of piled-on schmaltz stemming from the secret from Lee's past (given Chan's age, it doesn't even make sense) and a scowling sergeant (Yulin) who'll kick our heroes off the case. For his part, Ratner seems unable to commit to film an image that doesn't contain some element of mismatched buddy hijinks (from last year's holiday heartwarmer The Family Man to his 1997 debut, Money Talks, and last year's Ratner-produced Double Take). The director's next project is reportedly an adaptation of the Thomas Harris novel Red Dragon (elliptically filmed by Michael Mann as Manhunter in 1986); perhaps his Hannibal Lecter will be a streetwise motormouth and his Special Agent Will Graham will be a pencil-necked geek who cracks the case by getting jiggy for a change. Still, I'll concede that Jackie Chan could probably entertain the world just by filming his morning b.m. Even though he's underutilized here, it's still a trip to watch him use a trash can and a potted plant as fight props and squeeze his whole body through the slot in a banker's window. The credit cookies, as usual, are a hoot, funnier than the movie itself. And as far as off-the-wall antics go, Cheadle and Jeremy Piven seem at least to be enjoying themselves as the kung-fu-fighting, pigtailed proprietor of a Crenshaw Boulevard mah-jongg parlor and a swishy Versace salesman, respectively. Finally, Tucker isn't even a bit dialed-down from his usual sweaty comic mania, but perhaps there is pleasure to be found in the way that Ms. Zhang (who looks great in 21st-century designer garb) beats the holy crap out of him in scene after scene.