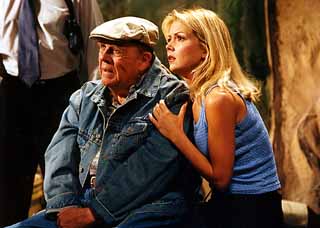 Produced by Billy Graham's World Wide Pictures, this breezy, earnest dramedy takes the old “on the run from the mob” storyline and adds a heavy dose of evangelical Christianity -- strange bedfellows, indeed. While it's competently directed by the debuting Vernon, there's precious little here to attract anyone not already part of Reverend Graham's flock. Ostensibly a road movie, the highway that Vernon's film travels is much closer to Michael Landon's heaven-bound one than the more traditional Hollywood variety, and, despite its wacky-mobster trappings (co-star Rossi will be recognized by fans of that other recent mob comedy Analyze This), the film's blatantly non-secular tone is almost certain to turn off anyone who arrives in search of a De Niro-esque pastiche. “It's a trip! Buckle your seatbelt!” advises the film's tagline, and in some respects, it's right -- it is a trip, though the chipper tone and heartstring-yanking premise are unlikely to require any sort of emotional shoulder harness. Amanda and Alan Tucker (Condra, Underwood), are a young couple living both in sin and in Sin City. Amanda works as a secretary for local mob underboss Sully Santoro, but the pickings are apparently slim in today's Mafia satellite services. As the film opens, her new VW's being repoed, the house payments are late, and husband Alan -- a shallow buffoon if ever there were one -- is nagging her about bugging the big man for a raise. When Amanda stumbles across $250 large in Santoro's office, along with a list of rigged horse races, Alan insists that they grab the green and bet the lot of it. The plan fails miserably, leaving the pair caught between the proverbial rock and a wiseguy. It's then that Amanda comes up with the seemingly foolproof plan of hitting up her aged, ill, and wealthy grandpappy Nathan (Hingle) in Flagstaff, Arizona. Undeterred by Santoro's admonitions to stick around Vegas in case he needs to whack her, she heads South and meets up with Nathan, a grizzled and altogether too saintly old hoss who's recently been reborn. He agrees to give her the $250,000 with the single stipulation that she drive him to Montana to go fishing one last time before he dies, just like they did when she was a child. The ensuing drive (and pursuit by Longo, as Santoro's strapping thug Vincent) is an emotional whirlwind, as Nathan clues in his heathen daughter to the bountiful fruits of evangelicalism, and she, in turn, comes to love the cranky old man and recant her previously wicked ways. Road to Redemption's biggest asset is its better-than-you'd-expect production values, which make it far superior to the vast majority of church-financed films (be it the Rev. Sun Myung Moon-backed WWII clunker Inchon or more recent fare such as Trinity Broadcast Network's heinous The Omega Code). To his credit, Vernon keeps the camera moving (here's a man who loves his crane shots) and the pacing light. Hingle, a veteran character actor who's appeared in everything from On the Waterfront to the Batman franchise (as Commissioner Gordon) gives a suitably dotty performance, while Condra (Gas, Food Lodging) practically defines the term “perky.” (It may or may not help matters that Wardrobe has her outfitted in SoCal porn-star chic.) Regardless, Road to Redemption will likely die a martyr's death at the box office. Its simplistic, purely evangelical take on the politics of spirituality is almost guaranteed to rebuff all but the most eager of viewers, and the feel-good, Afterschool Special storyline is, to mix religious metaphors, as unremarkable and plain as an Amish dinner ensemble.