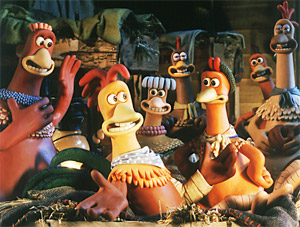 A couple of years ago, I was idly wondering when Aardman, the British animation studio, and their star director Nick Park would get around to making an animated feature when I heard the news that Chicken Run had finally gone into production. That was about the time that Park's work began cropping up on stateside television via his wonderful claymation advertisements for Chevron (with Techron!). Remember those talking, vaguely mopey automobiles that were all the rage? (I have a toy model of one sitting in front of me as I write this, so, yes, I'll bet you do.) Park had already nailed three Academy Awards in the animation category for his work on two Wallace & Gromit shorts -- 1996's A Close Shave and 1994's The Wrong Trousers -- as well as an earlier work from 1991, the sublime talking-animal gag Creature Comforts. Clearly, this was an animator going places. The Wallace & Gromit shorts, featuring the discombobulated amateur inventor and cheese-fanatic Wallace, and his dog Gromit, a model of perspicacity in his own right, have since been collected in a couple of commercially available videotapes. If you're new to this whole Aardman Animation thing, I hereby urge you check them out as soon as possible. Chicken Run continues Park and Aardman head Peter Lord's fruitful partnership, and if anything, it's even better than the short works Park has come up with for the studio. The story follows the adventures of a group of hens trapped in Mrs. Tweedy's (Richardson) chicken farm, confined in tiny, claustrophobic barracks surrounded by imposing metal fences topped by nasty-looking ringlets of barbed wire. Head chicken Ginger (Sawalha, of Britcom Absolutely Fabulous) spends her time devising various ways to escape their eventual fate -- dinner -- and continually finds herself foiled at every turn by the bumbling Mr. Tweedy (Haygarth) and his scheming, rail-thin wife. Things take a turn for the better when a stray American rooster by the name of Rocky “flies” into the hen's midst one night and, cajoled by Ginger, promises to help them learn how to fly and escape their pen. The whole 85-minute film is shot in Aardman's usual claymation (or Plasticine) style using the excruciatingly exacting method of stop-motion animation to move the characters around. That's one tiny movement for every frame of film, and at 24 frames per second of onscreen time, well, you can imagine why it took Aardman so long to complete this feature. That said, Chicken Run is absolutely delightful filmmaking, chock-full of gorgeously goofy animation and a storyline that cleverly echoes everything from Stalag 17 to Cool Hand Luke, with pit stops at Star Trek, The Great Escape, and even -- I kid you not -- The Shawshank Redemption. Park and Lord's subtly ridiculous animation is, as usual, a wonder to behold, but it's the well-wrought comedics of the storyline that sustain the picture as a whole. Gibson's unplaceable Yank accent is, well, interesting at best, but that's less a quibble than an added touch of surrealism to the whole proceedings. Finally, an animated film without any explosions, pop-rock, product-placement soundtrack songs, or ill-defined sense of moral ineptitude (yes, Titan A.E., I'm talking about you) that's actually and honestly fun for the whole family. 'Bout time, Nick, 'bout time. 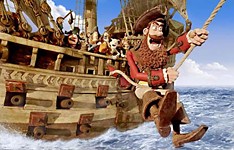 The Pirates!: Band of Misfits
Whether it's Pirates or Wallace and Gromit or Chicken Run, Aardman's stop-motion animation delivers the goods. Winter Sleepers
German director Twyker, who last year made his stateside splash with the audacious, invigorating Run Lola Run, made this chilly little number first, and it's ...