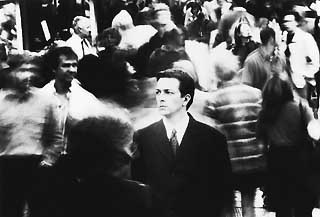 Ever get the inexplicable feeling you're being followed? How about those times when you come home to your flat to find that things -- small things, like your CDs, your books, or that pair of earrings you left sitting beside the sink -- seem subtly out of place? Disturbing little glitches that cause you to stop, think, and review. That's the intriguing premise behind Following, a barely-feature-length (70 minutes) and very clever film by Brit Christopher Nolan. Nolan opens with a scene inside a police interrogation office in which a clean-cut young man by the name of Bill is being interviewed by one of Her Majesty's finest. Bill (Theobald), an aspiring writer, explains that for the past year or so he's been following people at random -- “shadowing,” he calls it -- for the twin reasons that he's got little else to do and he's an observer of the human species. Men, women, random people of all types and ages -- he's taken to studying their habits by trailing them about London like some aimless ghost. As the film progresses, Nolan uses a nonlinear editing structure to introduce Cobb (Haw), one of the men Bill has been following. Approached by Cobb in a cafe after a whirlwind morning of halfhearted pursuit, Bill's ruse is called, and he finds an unlikely ally in this man, himself a petty criminal burglar. Cobb offers to let Bill tag along as he makes his rounds, and the pair become a bit of a team, with the elder, immaculately dressed Cobb allowing the younger, somewhat disheveled Bill to learn the tricks of the trade. And so Bill's ante is upped, and he becomes, almost by accident, a willing partner in (very petty) crimes. “You can tell a lot about people from their music,” remarks the avuncular Cobb as he rifles through a young woman's CD collection. As it turns out, though, you can't tell much about Mr. Cobb, or at least the hapless Bill cannot, and in no time (the film is brief, after all), this “game” of following has begun to develop some curious, dark undertones (not the least of which is a mysterious blond B-girl with connections to what looks like one of the Brothers Kray). Following ends on a contrived note, sadly -- by its last 20 minutes it's become as predictable as its protagonist, but up to then it's a sublime exercise in paranoid, mobile voyeurism. Neither one of these fellows is out to make the big haul, clearly. Bill's interest lies squarely in examining the human condition, while the more strident Cobb seeks to prove himself again and again in what can only be called a very risky business. Nolan's London (if, indeed, it is London -- there's no clear mention of place in the film, but it certainly feels as though it were) is a black-and-white chiaroscuro of leisurely pursuit and eventual capture. He milks his premise for every drop of tension he can wring from it, and the film is gorgeously shot and complemented by an edgy, breakbeat soundtrack that waxes and wanes with the action onscreen. Both Haw and Theobald are unique little ciphers, not quite fully developed characters, more like indistinct shadows glimpsed in passing. Unnerving and occasionally witty, were it not for its weak third act, Nolan's film might fall just short of genius. As it is, though, it's unique nonetheless.