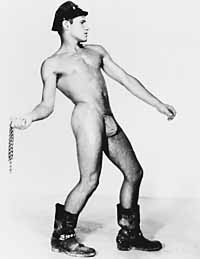 By turns a campy goof on 1950s muscle-mag culture, a slackerly attempt at investigative journalism, and a heartfelt elegy to an inscrutable pop-culture obscurity, Thom Fitzgerald's semi-biopic often seems to be floundering for an identity. But given his subject -- the life and times of pulp magazine impresario and low-budget nudie filmmaker Bob Mizer -- Fitzgerald's irresolution actually seems almost fitting. Mizer, a doting mama's boy who dressed like Clark Kent's less bohemian brother, espoused a Jack Armstrong-like code of traditional manly virtue and wholesomeness. He was also a closeted homosexual whose world-class feats of artistic sublimation produced as many as a million still photos and countless films featuring oiled and buffed young studs prancing around dressed as bikers, cowboys, Roman centurions, and the like. Many of these models lived with Mizer for months on end, lolling around his L.A. digs in decorative codpieces stitched by the director's mom. As his films and cash cow publication, Physique Pictorial, reached the mainstream's lower strata, the law slowly glommed onto their non-orthodox sexual undertones (subtle stuff like leering hoodlums forcing muscular cops to strip naked) and cracked down hard on him. Charges of distributing pornography and soliciting for prostitution were filed and Mizer, protesting his innocence all the way, went to jail. By his own admission, Fitzgerald (The Hanging Garden) changed his entire approach to his film as he stumbled onto more information about Mizer's real world. What began as a credulous tribute to a halcyon, sun-splashed gay Shangri La presided over by a doting Ward Cleaver/Hugh Hefner hybrid turned into a more accurate view of a time and place that never were quite as innocent as we persist in imagining them. Some of Mizer's protégés really were (gasp!) hustlers and drug users. Mizer was not blind to these facts and almost surely did advertise his boys' wares and specific “talents” to potential customers by means of coded symbols printed on their photos. Once these facts emerge -- sending the film down a whole 'nother track than the one it's previously been on -- Beefcake drops its camp trappings and becomes a harder-edged examination of institutionalized bigotry once again claiming the right to suppress what it can't understand. This is a bitter reality that is both familiar and easily belabored. To Fitzgerald's credit, he doesn't come down too hard on it, instead using imaginative means (including dramatized scenes shot in mock-Fifties style) to try and illuminate subtleties in Mizer's character. Not all of it works. The blend of tones and styles is undeniably jarring at times. I also wish Fitzgerald had substituted a bit more straightforward reportage for redundant shots of glossy hunks doing pushups. But there's an undeniable energy, originality and -- most hearteningly -- optimism here that makes Beefcake well worth your time, shortcomings and all.

It Takes Huevos
Oh Ahhhhnold, you have such nice eggs!