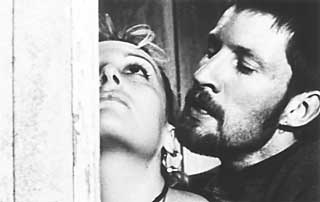 Absolutely uncompromising in its depiction of the tedium of garden-variety evil, this feature debut is as relentlessly downbeat -- and as stoically uncompromising -- as they come. Sad to say, it's also based on a true incident that occurred in Sydney, Australia, before being written into a stage play by Gordon Graham and then adapted by Woods for the screen. There's nothing like a black little dollop of true crime to make you want to have an awful shaving accident and just sod it all off, once and for all. The Boys, regardless of the fact that it's a brilliant exercise in avant-noir filmmaking, leaves you clammy and trembling, desperately in need of a shower and a hug. It's that rough. “The Boys” in question are a trio of Sydney sibs, led by the ill-tempered Brett (Wenham), fresh out of jail on an assault and GBH charge. Dispirited that he's spent his entire term in the pen with nary a visit from friends or family, his return home begins on a sour note and escalates over the course of the day into a veritable arpeggio of in-house emotional terrorism. Younger brothers Stevie (Hayes) and Glenn (Polson) are both petty criminals and do their best to assuage Brett as their cowed and frightened mother putters about ignoring the seething, low drone of coiled tension within the household. Stevie's pregnant girlfriend cowers, uncomprehending, while Brett's old flame Michelle (Toni Collette of The Sixth Sense) backpedals furiously, simultaneously trying to calm her drunken ex and blaze trails as fast as possible. It's not so easy. Brett's manipulative presence is like a lit fuse, capable not only of igniting his own uneasy past but those of his sheep-like brothers as well. He's an (in)human tornado of self-centered masculine rage, a familial virus intent only on infecting the others at hand. For all this vitriol, Woods' film is a remarkably quiet affair at times, moving between the ennui of any dysfunctional family homecoming and the explosive outbreaks of Brett's uncontrollable temper. Wenham, who also starred in the stage production, has a face like a fuzzy cluster of quartz, all hard angles and furrowed brows, and when he goes off, you recoil, shocked. Woods, who began his career doing experimental short films, puts those years to good use in The Boys. Cutting between real-time action and flash-forwards that grimly hint at some unspecified horror presumably to occur in the boys' near future (which, as it turns out, we never see), he jumbles our expectations as much as those of his characters. The result is an electrifying tour de force of nonspecific violence that as well as any other film I've seen describes the pathological self-destruction of a damaged male psyche. The Boys makes no pretense of explanation or apology -- it works on its own brutal terms, and it's a terrible, riveting film.