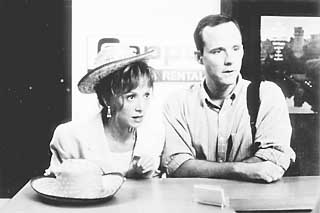 It begins on a bridge and ends there, too, but in between Tanya Wexler's debut feature is anything but your ordinary bridge story. Vibrantly funny and shot through with a borderline elegiac tone, Finding North is a small gem, all the more so for its Texas connections (it was shot in and around the Dallas/Denton area and first played Austin during SXSW '98). When a sassy Brooklyn banker teller (Makkena) witnesses a nude man almost leap to his death from atop the proverbial bridge, she manages to track him down the next day, ostensibly to return the loafer he left before exiting the scene. In the opening parallel storylines, we see Rhonda Portelli, the teller, agonizing over her muddled life -- she lives with a pair of sniping parents, her 30th birthday has arrived, and her love life is somewhat short of spectacular. Across the way, the suicidal Travis (Hickey) is lost in the wake of his lover Bobby's death from AIDS. So he hosts parties, gives away his possessions, and though testing negative, he still waits to die. When the two finally meet up, Rhonda affixes herself to this strange bird and follows him to Denton, Bobby's hometown, in a quixotic quest to put the past to rest, if possible, and begin again or die trying. It sounds grim, I know, but Wexler puts an easy hand to material freighted with angsty subtexts. Finding North is less about loss than redemption, and the script's light humor smoothes what might otherwise have been a 95-minute mope fest. As the snappy Rhonda, Makkena has the New York Italian-American vibe down pat; despite her trials (an unending barrage of phone calls from her nagging mother (Pietropinto) and her silent dad (Roman) track her throughout the film), she's a resolute optimist, not only intent on salvaging her own life but also that of her newfound friend, all with a nasal whine reminiscent of Fran Drescher but far more appealing. Hickey's Travis is a sudden loner, fixated on the loss of his lover and unable, or unwilling, to move past the grave to the flowers beside it. The gravity of the situation may want to bury him as well, but he's battered awake by Rhonda's displaced, ebullient joie de vivre. Complemented by an earthy, jazzy score from Café Noir and some fine camerawork by director of photography Michael Barrett (who manages somehow to make Denton appear far more visually enticing than it actually is), Finding North is a sweet, quietly romantic, and hopeful gem. A few minor trims in certain spots could have tightened it up a bit, but that's a minor quibble. As it is, it's a little bit of quiet magic. 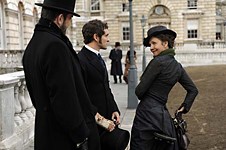