It's rare to find a film as bizarre as this that also comes with an equally bizarre pedigree, but it certainly makes for some interesting theorizing. Consider: Simply Irresistible, a romantic comedy of the frothiest sort, is the directorial debut of Mark Tarlov, better-known as the producer behind John Waters' last two outings (Pecker and Serial Mom). There is, of course, no trace of Waters' naughty subversion here; instead, we have two interesting performances jammed in amongst a spate of truly awful ones. (The two of interest are Clarkson, who was recently seen as the Teutonic junkie du jour in High Art, and Baker, who played Happiness' very bad Dad. Both of them prove they can act relatively normal when given free reign in a mediocre love story.) Topping things off is Gellar herself, an actress who slays the undead with the best of them on television but comes across with all the strength of a soggy Twinkie in widescreen. It's all too odd to credit, and that's not even including the storyline. Gellar plays Amanda Shelton, a Tribeca single who has inherited her mother's beloved eatery, the Southern Cross. Alas, she's no Emeril in the kitchen; the restaurant, which has apparently been in the family for 70 years, is failing, and her idea of haute cuisine hovers somewhere in the margins of Like Spam for Chocolate. One morning while out canvassing the open air market for that day's lunchtime ingredients, Amanda encounters what may or may not be an angel (the film is resoundingly unclear on such matters) who gives her a basket of enchanted soft-shell crabs. As luck would have it, one magical crustacean goes AWOL and ends up uniting the emotional Amanda with Flanery's Tim Bartlett (looking for all the world like a young David Cassidy), a natty, semi-conceited uptown department store manager who's in the process of building a new A-list restaurant. In short order, Amanda and Tim are falling in love as that enchanted crab imbues her with the power to cook her emotions into her foodstuffs. Overnight, the Southern Cross is booming, Amanda is written up in the Times, and Tim is swept off his feet (literally) by her witchy kitchen hijinks. What's going on here? No one, least of all the screenwriters, seems to be able to tell us. There's levitation, hors d'oeuvres seething with dry-ice fog, weeping patrons, and a score from Gil Goldstein that reeks of bad Seventies television melodramas. The point, of course, is that old nugget “follow your heart,” though Tarlov rephrases it in a most unusual way and adds heapings of unnecessary storybook allusions. Muddled and confusing (Why is everybody floating? Where did the phantom dance band come from? What were Dutch Schultz's final words?), Tarlov's romantic comedy is eminently resistible, an unclassifiable cinematic leftover best left untasted. 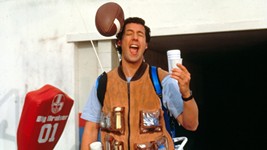 The Waterboy
Another half a year, another Adam Sandler film. Director Coraci, who reined in the manic comic in their last outing, The Wedding Singer, takes the ...