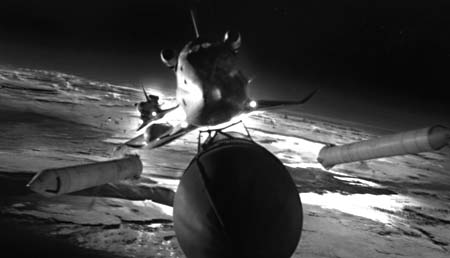 It's big, it's stupid, it's pretty kick-ass. That's about all you need to know about Summer '98's loudest testosterone-fest, the second in a death-from-above double header that started off last month with the weak Deep Impact. As helmed by “bigger is better” wunderkind Bay, Armageddon ups the ante from that previous film by replacing Robert Duvall's hero-named-Tanner with Willis' hero-named-Stamper, gigantifying the incoming asteroid and wiping out more cities, faster, louder, wilder (particularly nice is the End of Paris, and, presumably, Euro-Disney). Bay wastes no time in getting to the action, leaving the planet just 18 measly days between discovery and impact (Deep Impact had near as many months). Alerted to the problem after a few “Volkswagen-sized” particles redecorate Times Square (in a nice comic touch, one of the asteroid's first victims turns out to be a street-corner Godzilla vendor), NASA director Dan Truman (a slimmed-down Thornton) hires the world's best deep-core oil drillers -- headed by crusty Harry Stamper (Willis) -- to rendezvous with the asteroid just shy of the moon, sink a supernuke in it, and blow it off course. Willis, who one of these days is going to get an Academy Award for Best Squint, is ideal for the role, though I had the feeling he was borrowing heavily from the Ed Harris character in James Cameron's The Abyss. (His whole team, in fact, seems recycled from that film, which in turn was recycled from World War II G.I. epics like The Fighting Seabees.) It should go without saying that supporting characters like Buscemi, Wilson, and Campbell are there for the ricocheting of one-liners, and that Liv Tyler's lips are the most emotionally expressive thing in the film. This is of little consequence in the summer blockbuster wars, in which storylines are lost and forgotten amidst the charred rubble of whatever metropolis “gets it” next and the quality of the effects is more important than the quality of the acting. Bearing that in mind, Armageddon has very impressive effects (not the least of which is making Steve Buscemi into a believable ladykiller). Bay hammers the linear narrative home with the indefatigable strength of John Henry pounding steel, never stopping for breath, and never allowing the audience time to ponder the various incongruities that pop up. His golden-lighted, amber-waves-of-grain patriotism (and there is much of it, usually in slow motion, always accompanied by elegiac music) begins to grate about 10 minutes into the film, but if you look at it as a bizarre comic element it's that much easier to stomach. No one in his or her right mind is going to take this juggernaut explode-o-thon seriously, of course, but as far as popcorn-grubbing eye candy with deafening sound and plenty of cheeseball Aerosmith tuneage (and progeny), it's great fun. And what other film this summer opens with Charlton Heston as the Voice of God intoning global doom? Not a one.