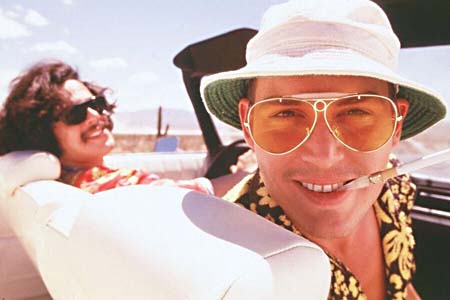 Fear and Loathing in Las Vegas

You know the feeling you get when you're the only straight person in a room full of people who are all ripped out of their gourds? That painful realization that you're over-the-counter while everyone else is under-the-table… way under? Watching the film version of Fear and Loathing in Las Vegas is something like that experience. Not very much fun to observe, yet altogether fascinating. All the naysayers who, over the years, have pronounced Hunter S. Thompson's counterculture classic to be “unfilmable” have now been proved wrong. Co-conspirators Terry Gilliam, Johnny Depp, and Benicio Del Toro have executed the book's transition to the screen almost flawlessly. That flawlessness, in fact, may almost be the problem. There's something about that extra layer of distancing that a book can offer and the screen can't, which in this case might account for why film viewers feel vaguely discomforted by an icky fifth-wheel sensation. The film is amazingly faithful to Thompson's presciently gonzo tome in which a journalist's assignment to cover a motorbike racing event outside Las Vegas turns into a twisted, first-person descent into the demented psyche of the unraveling American Dream. It's a journey fueled, of course, by a legendarily prodigious amount of drugs, extracts, and epicurean black-market imbibeables -- enough to turn Thompson's alter-ego Raoul Duke (Depp) and his sidekick attorney (Del Toro) into drooling, manic madmen, visionaries of the apocalypse but imbeciles of the immediate reality. The film's most stunning achievement is the veracity of its portrait of the hallucinatory drug state. It's use of state-of-the-art visual technology to create such illusions as winged bats, carpet patterns enveloping their human cargo, and hotel-bar patrons morphing into frightening lounge lizards (courtesy of Rob Bottin) is no less true and dazzling than its ability to capture such moments as the drug-addled paranoia, the twisted perceptions, the mescaline-induced puking, and the more-is-better credo in action. The camerawork by cinematographer Nicola Pecorini (making his feature filmmaking debut here) is a constantly amazing thing to watch, full of strange lenses and intoxicating movements that serve the material well. Also note-perfect are the performances of Depp and Del Toro, whose spooky renditions of their subjects are kinetically compelling wonders. And Gilliam, whose body of work as a director is a virtual testament to the belief that madness is indeed a salve for the soul, seems the perfect director for this “unfilmable” material. So why doesn't this movie work? I think it has something to do with the film's focus on the fictional character of Raoul Duke as the story's protagonist. As a “character” Duke assumes the proportions of a drug-addled buffoon. The movie obscures the key aspect of Duke as the “alter ego” for this wonderfully insightful observer known as Hunter S. Thompson. Even though the film faithfully quotes long portions of the book in continuous voiceovers, we get little sense of the writer and journalist who “shapes” this adventure into a thing of commentary. By focusing on the excess, the film loses Thompson's philosophical mooring in the belief in excess as a valid path to wisdom. And it's that wisdom which may be the untranslatable part of the book. It's what comes through when we read about all this stuff on the page, when we recognize that the experiences have all been sifted through the mental process that translates thought into expression. The immediacy of the movies may contradict the ideological conceit at the heart of gonzo journalism -- that being the idea of the observer creating a fiction that's more true than the movies. Ironically, the film may be a better tribute to the artwork of Ralph Steadman than the writing of Thompson. Steadman's garish illustrations have always been an undervalued element in most understandings of the book's success, and it's certainly this film's visual qualities that truly set it apart. At any rate, the movie is clearly intriguing in ways it may not have intended. Unfortunately, in ways that it probably did intend to engage, Fear and Loathing has much more bark than bite.