Like so many pieces of colored glass, the multiple characters and scenarios of The Baby-Sitters Club constantly shift and reassemble in vivid and fanciful patterns. Turning this kaleidoscope of a movie with a deft hand, Melanie Mayron (thirtysomething) in her big-screen directing debut delivers a quirky little movie that captures a lighter side of the oft-explored, flip, desperate-to-be-hip, angst-ridden, roller coaster ride of adolescence. The Baby-Sitters Club is a conglomeration of story lines from the phenomenally successful series of books by Ann M. Martin about a group of friends whose adventures in baby-sitting are the core around which the travails and drama of their post-pubescent lives unfold. The centerpiece of the picture is a poignant and wonderfully disconcerting story about imperfect parental love. Kristy, the president of the club and an energetic and outspoken tomboy (played with natural exuberance by Sissy Spacek's daughter, Schuyler Fisk) has an unexpected reunion with her well-meaning but totally unreliable father (Mayron's thirtysomething cohort, Horton) that pits her fervent desire to be loved and wanted against her natural inclination for openness and honesty and loyalty -- qualities her father knows little about. Concurrent stories include one club member's summer romance with an older boy, another's struggle to pass science, an emerging friendship with a crotchety neighbor, and the ongoing battle with the sworn enemies of the club, the devious, rainbow-sherbet-clad Cokie, Bebe, and Grace. The movie zips from one story to another, going through as many mood swings in its hour and 20 minutes as an average 13-year-old girl goes through in, well, an hour and 20 minutes. Bright and cluttered and engaging, The Baby-Sitters Club has a youthful buoyancy and whimsical rhythm that catches even the most jaundiced (i.e., 16-year-old) viewers up in its play of light and energy. 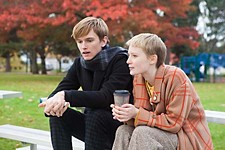 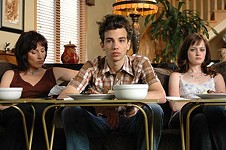 I'm Reed Fish
The ultimate indie self-indulgence, this film (with a script by Reed Fish) is weighed down in its own coming-of-age angst.