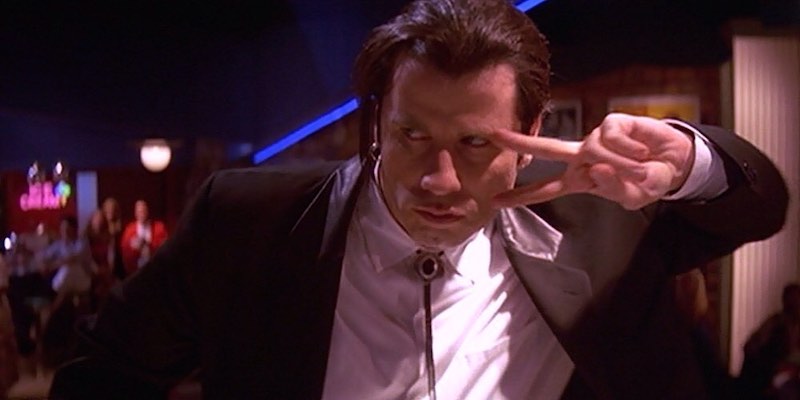 Screw pulp fiction. Make mine a valentine. A valentine to Pulp Fiction. Rarely have I left a movie theatre more thrilled or invigorated as I did after leaving Pulp Fiction. Quentin Tarantino's second feature film (the first was Reservoir Dogs) lights up the screen with the same blazing torch that it carries for the idea of the movies. (And with both Pulp Fiction and Ed Wood in concurrent release, there has hardly been a better time in history for the celebration of pure, unadulterated movie love.) The trick, as far as I see it, is how to talk about Pulp Fiction, the energy the film expresses, and the momentum it generates without defusing that same energy and thrill for others. And, the movie makes you want to talk, want to babble, want to share your thoughts and enthusiasms. Pulp Fiction succeeds on so many levels. Like Tarantino's other films so far, Pulp Fiction is another crime story, one in which guns and drugs and hitmen and dames are fixtures on the landscape. But it's a landscape also marked by its humor, its color, its dialogue, and its characters. It's clear why actors are falling all over themselves to win parts in upcoming Tarantino projects. Actors in his movies just shine. If nothing else, Pulp Fiction will earn Travolta and Willis the professional respect their work has always deserved -- even if the projects they chose for themselves were often less worthy of respect. With this project, Tarantino presents himself as one of the smartest storytellers around. Pulp Fiction is constructed from an anthology of stories whose total connections to each other are not made explicit until the end. And by the time the end arrives, there is absolutely no doubt about anything anymore. Very satisfying. Classic storytelling, modern techniques. And the images: This movie has embedded so many strange and new mental pictures in my head that I'm not able to shake free. Yet, neither would I want to be free. There's Travolta doing his Bat Dance, the retro drug zone of Jack Rabbit Slims, the platform heels perched on decorative wall pedestals, the back of Ving Rhames' head, the way Thurman magically draws a square in the air, the way you never get to see the contents of a valuable suitcase, and on and on. Tarantino also writes dialogue like nobody's business: smart, fast, funny, and unshakable. Tarantino is a young director and it could be argued that his best is yet to come once he discovers more things to express. But that assumes there exists a world of stories and a world of ideas. And on those terms, Tarantino is, at least, the master of one. And that holds great promise for a long and rosy future. And ain't that the perfect color for a valentine?