Sunset Boulevard opened with a voiceover from a dead man, enraging some critics who just didn't feel comfortable interacting, even in their imaginations, with a corpse. Audaciously, Traces of Red uses the same device and, by doing so, begs for even more criticism than that endured by Wilder's baroque masterpiece. The most major problem is the fact that after a flash forward opening scene which Belushi plays prone and with a bullet hole, the star doesn't show much more life, even when he's walking and talking. He's cruelly miscast as a Palm Springs detective who's fatally attractive to women. Yet it would be a mistake to place the blame solely on Belushi though he makes the most inviting target. Bracco only barely manages to hang on to her dignity playing a slutty society matron who enjoys after hours fun with Belushi. But as inexplicable as Belushi's powers of seduction may be, there seems to be little question about his character's powers of detection: the man is a moron. The movie is close to half over, he's receiving threatening letters, his female acquaintances are turning up dead at an accelerating rate, and only then does he begin to think he might be connected to it all somehow. That's when we're introduced to a truly distasteful subplot involving Belushi's sexual molestation as a child (yes, even at six years old the women just couldn't keep their hands off him). This movie is bad right down to the costuming. Bracco's character is supposed to be fabulously wealthy so she's shown wearing tacky, glittery rhinestone bracelets with every ensemble. It even squanders what little depth that could be gained from exploiting the locale. Characters move from Florida's swampy badlands to Palm Beach's sparkling coasts, but the camera passes it all by with the same disinterested eye. So what happened? First time director Wolk seems to have taken the first take every time, the movie plods and the solution to the whodunit is as nonsensical as it is predictable. From that very first self-congratulatory shot, Traces of Red has a lot to overcome and it never comes close. 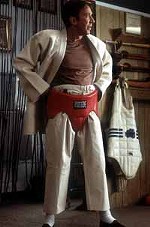 Joe Somebody
It wouldn't be the holiday film season without the release of at least one bland, by-the-book comedy sandwiched in between the serious Oscar fare and ...