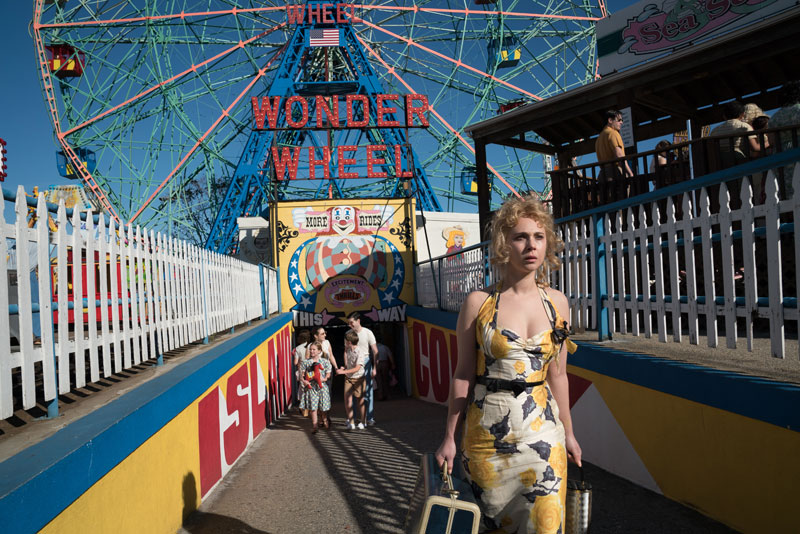 Wonder Wheel, maybe Woody Allen’s most glorious-looking film since Manhattan, is an idealized dream-memory of Coney Island’s amusement park just after World War II. The movie is a visual feast, courtesy of Vittorio Storaro’s saturated postcard-perfect cinematography and Santo Loquasto’s impeccable period design. (The mysteriously fluctuating color schemes in some of the more intimate scenes, however, are distracting, like an early-model Zenith television without hue control, randomly rendering Kate Winslet’s face orange all of a sudden.) But unlike Manhattan, this perfunctorily conceived film about an unhappy woman starved for romantic and personal fulfillment never lives up to its brilliant production values. Its storyline is a half-baked pulp novel: A fortyish former actress working as a clam house waitress (Winslet), who’s married to a dunderheaded carousel operator (Belushi), aspires for happiness in an affair with a much younger graduate student working as a lifeguard on the beach (Timberlake), who in turn becomes attracted to her pretty stepdaughter (Temple) on the lam from a gangster husband. And, oh yes: The heroine (if you can call her that) also has a young son from an earlier marriage who’s a pyromaniac. Thank God for the latter. The kid provides the only fire in a melodrama lacking any real heat.

As is the case with most of Allen’s films in the last 25 years or so, the script plays like a first draft, with the characters spouting stilted dialogue you’d never use in conversation, much less ever say out loud. (It’s weird, but you can hear Mia Farrow speaking some of the words.) When Timberlake’s tanned (and unreliable) narrator, a wannabe Eugene O’Neill who calls himself a writer but apparently never writes, breaks through the fourth wall to address the film’s thematic quandaries, you cringe. In JT’s defense: No one could recite dialogue observing that the heart has its own hieroglyphics and not appear the fool. Even the Woodman couldn’t sell that familiar-sounding line in real life.

As the discontented Ginny, Winslet emotes all over the place, going from sympathetic to lonely to deluded to angry to manipulative to loony, as if she were spinning on that titular Ferris wheel glowing just outside her home in the park. It’s a lot to ask of an actress, though she does the best she can. The other actors don’t fare as well because their characters make even less sense. Belushi’s loutish husband is contradictorily loving and hateful (a Stanley Kowalski gone to seed), Timberlake’s lover boy is a real phony, and Temple’s ingénue in the story’s acute love triangle has little to contribute. In the end, when a fluttery, whiskey-soaked Ginny (in full Blanche DuBois mode) barks, “Oh God, spare me the bad drama,” you’ll think: from her lips to Woody’s ears. 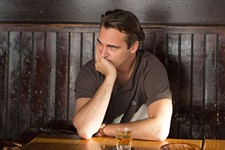