The Double Life of Veronique

This movie achieves a rare grace: it tells a story that could only exist in the form of a movie (or, perhaps, as a piece of poetry). The story is told not so much in customary narrative structures, but in glimpses, hints, and intimations. It has a way of taking the solid and making it chimerical. The story goes something like this: on the same day in 1968 two women are born, one in Poland, the other in France. Though they share the same name and identical looks, the same affinities for music and the same coronary condition, they live worlds apart, never knowing of the other's existence. Yet each senses the other and has intuitive knowledge of the other's presence. The Polish Veronika has an unsettling feeling of not being alone in the world. The French Veronique feels as if she were in two places at once and reacts instinctively to her environment. The movie links the two women through resonant visual cues: identical gestures, a piece of string, the same hobbling old woman seen in the street, a translucent ball that refracts the light as Veronika looks through it and which later falls out of Veronique's purse. But even more inexplicable is Veronique's ability to learn from Veronika's experiences. After Veronika dies on stage while singing, Veronique decides to give up her singing career, much like the fable told by the puppeteer who provides another level of commentary on their story (yes, their parallel lives are further reflected in the form of a puppet show). In that story, when one girl burns her hand on a stove, the other instinctively knows to pull away from the flame. Somewhere in all this also resides a political allegory about France's advances being tied to the mistakes of Poland's past. To the extent that this movie fails, it is due to the story's opacity, to its calculated coil whose apogee leads ineluctably back to the center. The Double Life of Veronique at times verges on the inscrutable, but never bafflingly so. It always makes sense, if only in an intuitive, non-verbal way. Then there appear these glorious shots, shots so articulate, audacious and arresting that they fill you with the joy of watching movies. The shot of Veronika seeing her reflection in a bus completing a 180 degree turn as her Double is shooting a photograph of her is an image that's enduringly thrilling and stimulating. Actress Irene Jacob, whom the camera loves, plays the dual roles of Veronika and Veronique and was awarded the Best Actress prize at Cannes for her efforts, the first major casting of her career. This Polish/French co-production also manifests a rare sense of mortality with characters aware of their corporeal immediacy and their permanent ephemerality. It is as though all of us are but flesh and blood, specks of dust on the celluloid of life. Make your smudges while ye may. 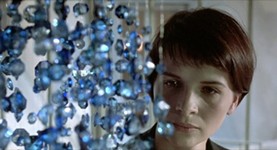 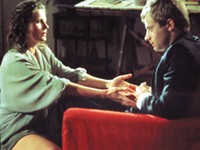 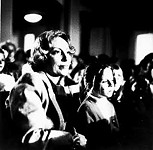