SXSW Film Review: Walk With Me

With “unprecedented access” (their term) to celebrity mindfulness master Thich Nhat Hanh and his Plum Village retreat in rural France, Max Pugh and Marc J. Francis turned three years of footage into a ruminative poem as lyrically shot and edited as its subject’s own writing. 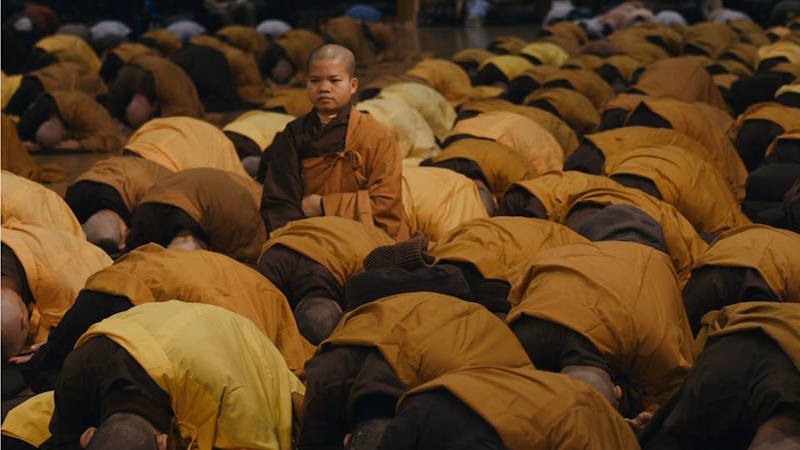 Photo courtesy of Walk With Me FB

Before March 12’s World Premiere, I firmly believed, as the son of a devoted meditator, that no film about the art of mindfulness could make me weep. This is not because I don’t agree with meditation as a concept, but because cinema has yet to catch up to the genuine power, that deep-soul pull, expressed by its advocates. Yet the intense wisdom and complete tonal sincerity reflected in Pugh and Francis’ introspective documentary, Walk With Me, forced me to change my thinking on this subject – thrice.

Francis (the director of 2006 Sundance breakout Black Gold) produced, shot, and co-edited (with Nicolas Chaudeurge and Alan Mackay) the film, suggesting a serious personal relationship to Zen Buddhism. Appropriately, a smattering of Hahn’s intimate journals from the mid-Sixties are read through voiceover by Benedict Cumberbatch. And while the British actor may seem like an odd choice to narrate a nonfiction film about East Asian spiritual practices, his stentorian dulcets actually help to hypnotize, as they did when Cumberbatch voiced Smaug in the Hobbit films.

Every technique is deployed by the filmmakers to forcibly lull the viewer into a meta-meditative state, from static camera montages of sunsets over Gallic woodland to the omnipresent score by Germaine Franco. They lace the orchestral instrumentation practiced at Plum Village with live performances by Hanh’s monks in New York and a soundtrack of soft, fluttering woodwinds.

Placed atop Francis’ becalmed, natural lighting-heavy photography (these images boast unceasingly beautiful coloration work by Chris Rodgers), the score helps to suggest an alternate reality without discomforts, anxieties, or miseries. By the time we actually see footage of visitors meditating, their tears and their trembling make perfect sense: Walk With Me has been asking you to purge your mental waste since you stepped into the cinema.

As a love letter to Hanh himself, no film that I know – including 2014’s One Week in Plum Village or Meditation in Action: The Life and Work of Thich Nhat Hanh – has matched the cinematic grandeur of Walk With Me. Ultimately, this lovely movie falls somewhere between unintentional mindfulness propaganda and brief (truly brief) historical consideration of Hanh’s impact on international spiritual health. What makes Francis’ and Pugh’s direction so special here is that they appear to have worked less to convert the skeptical than to move the close-minded, as all great entertainment should. You may not come out of their documentary wishing to join Plum Village, but the filmmakers leave you desperately wanting more time with it.