SXSW Film Review: 'Above All Else'

Proverbs 4:23 says, “Guard your heart above all else, for it determines the course of your life.” 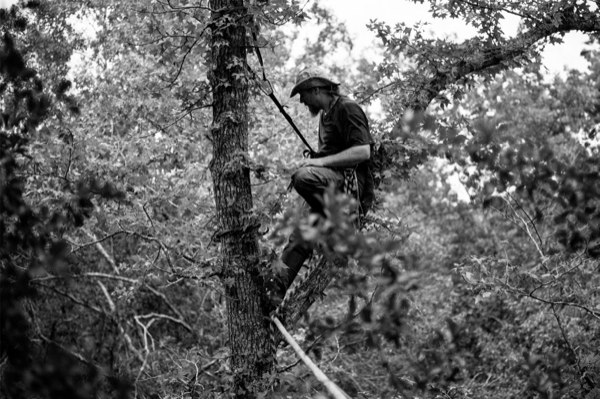 Austin documentarian John Fiege follows East Texas landowner David Daniel as he fights to protect his property, which he views as his daughter’s birthright, from encroachment by TransCanada, the energy company behind the controversial Keystone XL pipeline.

Much like civil rights activists in the Sixties, Daniel and his fellow property owners harness the raw energy of college students, members of the Tar Sands Blockade, willing to engage in risky behavior like going off the grid to sit in trees on Daniel’s property, employing nonviolent protest as a way to push back against corporate bullies who threaten arrest, eminent domain, and costly litigation to strong-arm the little guys.

It’s clear whose side Fiege is on, playing up the protestors’ self-characterizations as Ewoks and Hobbits staving off the harsh machinery of industrialization and corporate greed. You can’t help but cheer as middle-aged protestors chain themselves to the axles of trucks transporting enormous pipes destined to carry viscous bitumen through old-growth East Texas forests. You can’t help but weep as those same lands grow increasingly scarred as the southern part of the pipeline nears completion.

Above All Else is a devastating, beautifully shot portrait of an intimate, deeply personal struggle embedded with broad implications, from indigenous peoples’ tribal autonomy to permanent climate change. It’s a movie everyone should see.