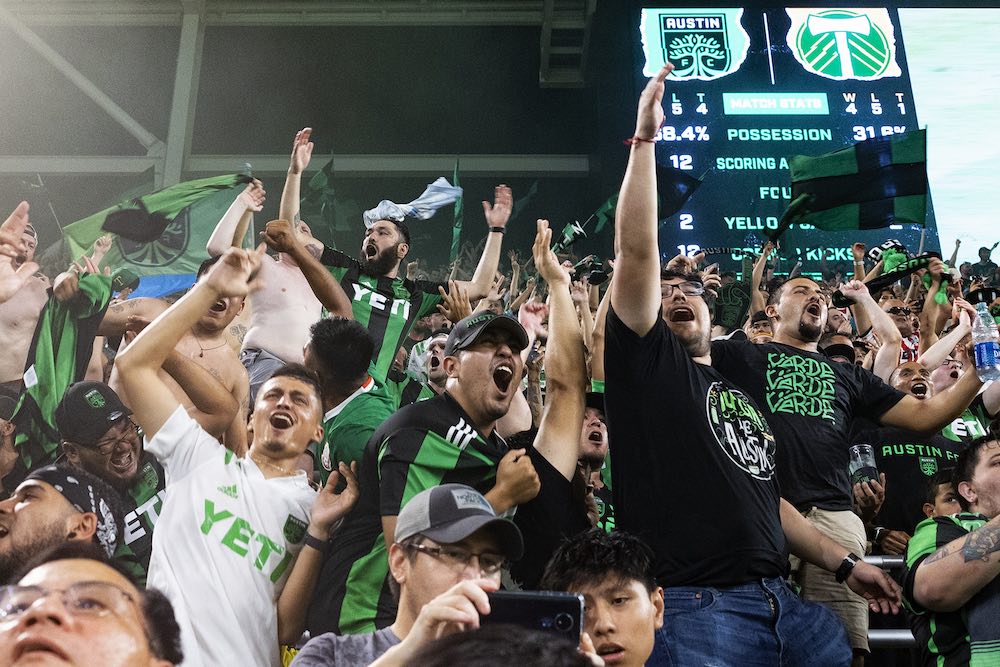 Josh Wolff could feel it.

Following Austin FC’s second consecutive 0-0 draw at Q2 Stadium last weekend in which the Verde extended a scoring drought to one goal in seven games, Wolff knew his squad just needed to connect one time for the floodgates to open.

“You hate to say it, you get one [goal], you hope you’re going to get a number of them,” the ATXFC head coach said then. “We’ve done enough in these games to get results. We’ve created enough good chances, and the goals aren’t falling.”

Thursday night, 28 minutes into the third MLS match at Q2 Stadium in front of another sellout crowd, the Tenacious Trees finally got their breakthrough courtesy of plucky Irishman Jon Gallagher. Then, as prophesized, the goals just kept coming.

And they weren’t just your ordinary goals – not that the Verde faithful would have cared, having sat through more than 200 combined minutes of scoreless action at Q2 before Gallagher’s strike. His opener punctuated an outstanding run of play from the hosts to start the match, dominating possession and putting the Timbers under constant pressure in front of goal. In a moment diagramed by Wolff at training the day before and executed flawlessly by his men on the night, Gallagher received a pass from high-priced South American attacker Cecilio Domínguez at the top of the box, played it wide to high-priced South American attacker Tomás Pochettino on the right wing, then continued his run toward the six-yard box where his left foot found Pochettino’s return pass for the finish. Gallagher proceeded to scream bloody murder as Q2 shook.

“It was a surreal moment. I’ll never forget it,” Gallagher said. “I’ve visualized it for the last few weeks. I’ve obviously wanted to score a bloody goal for a while. We all have.” 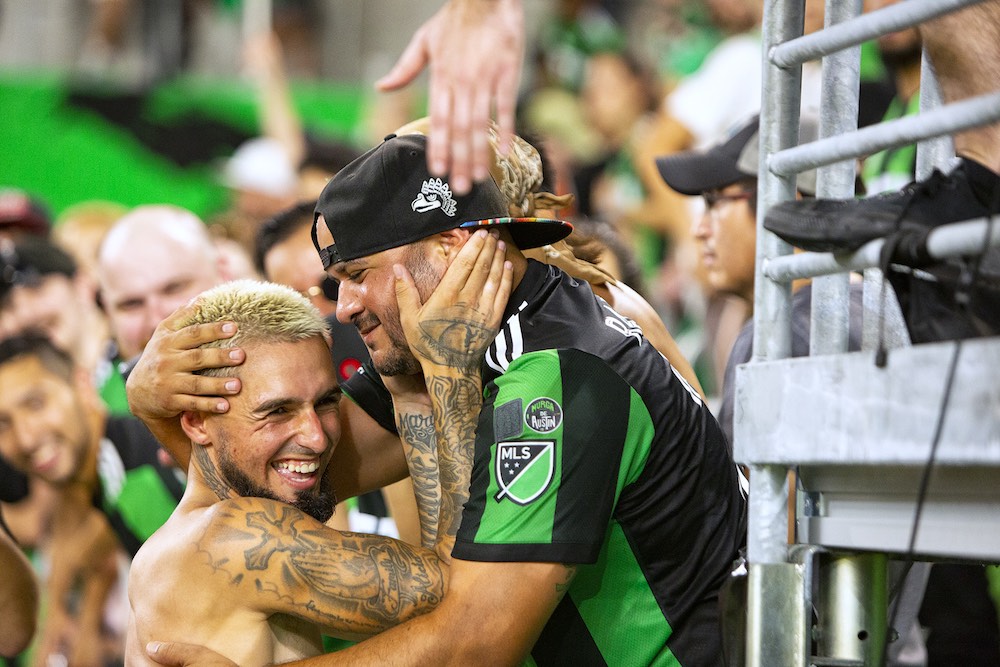 Perhaps adding to the goal’s legacy, Gallagher scored it with his left foot which, moments prior, was getting worked on by medical staff for an injury. “Ironic, isn’t it?” he said. “I didn’t feel a thing [while scoring] because adrenaline is pretty special.” Gallagher would have to be replaced at halftime and the severity of the injury is not known.

The wait for the second goal was a relatively instantaneous five minutes. A thunderous defensive header by center back Julio Cascante launched Austin FC on the counter attack when Domínguez arrived first to the loose ball. The Paraguayan laid it off to Diego Fagundez, who used the same right foot which struck home Austin FC’s first-ever goal ten weeks ago to double the Verde lead.

Things tensed up late in the second half when Portland right back Pablo Bonilla upended Domínguez inside the box. The possible penalty was reviewed by referee Ted Unkel and deemed not to be a foul despite the dissenting opinion of 20,738 Austinites. Then, with the last kick before halftime, the Timbers took advantage of some disinterested Austin FC defending as Jeremy Ebobisse scored to make it 2-1 at halftime.

But the second half was all ATX. Already in the habit of exorcising demons, Austin FC warded off its set piece struggles in the 77th minute when club captain Alex Ring guided the ball into the side netting with a glancing header off a Domínguez free kick. It was Ring’s first goal for Austin FC and the club’s first-ever headed goal.

Finally, veteran right back Héctor Jiménez bagged goal number four in the 81st minute, undressing a Portland defender in the box and ripping his shot past goalkeeper Steve Clark to close the show. And what a show it was.

Austin FC would have received a well-deserved standing ovation at the final whistle if not for the fact that most fans had already been on their feet for most of the match. The Oaks dominated the Timbers in every facet, monopolizing possession to the tune of 69% and outshooting the visitors 13 (eight on goal) to five (one on goal). It was a performance worthy of the club’s first home victory, a moment Wolff called “extremely significant” for the organization.

“We had [club owners] Anthony [Precourt] and Eddie [Margain] in the locker room after the game, and in essence they brought us all here. They built this unbelievable stadium, delivered us to this fantastic community, and unfortunately in our first two games we weren’t able to get goals. We weren’t able to capture a win. But the fans, everything’s been right. And tonight, all of it was right. We got the goal, obviously, to break that seal, and then to capture our first win in Q2, it’s a momentous occasion,” Wolff said.

With the three points earned Thursday, Austin FC jumps into a virtual tie with Portland and Real Salt Lake for the seventh and final Western Conference playoff spot through roughly a third of the season. They’ll look to ride their newfound attacking confidence to a second-straight home win against LAFC on Wednesday at 8pm, airing locally on KBVO.