Peace Officer is such a timely film, it’s almost absurd. The documentary, which won the grand jury prize this week at SXSW, deals with the rise of police militarization and use-of-force deaths. 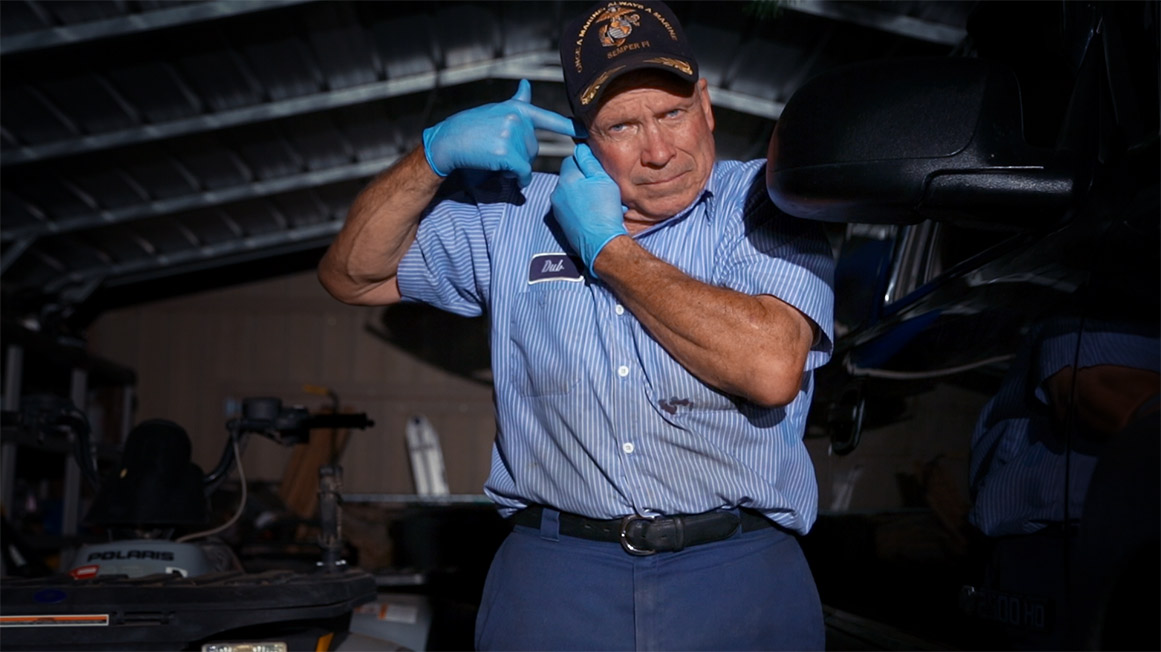 Lawrence reenacts a moment from his son-in-law's standoff. (Courtesy of Peace Officer)

However, the film is no quickly-cobbled-together attempt to capitalize on the public’s sudden interest in these issues, but instead the product of years of work. First-time feature filmmakers Scott Christopherson and Brad Barber began working on Peace Officer in 2012 after meeting William “Dub” Lawrence, the movie’s central character. Lawrence, a former Utah sheriff, had become obsessed with getting to the bottom of his son-in-law Brian Wood’s deadly encounter with a SWAT team. Having heard Christopherson was a filmmaker, Lawrence asked him if he would help teach him how to edit film – Lawrence had been piecing together video footage from the day Wood died in order to get a more precise sequence of events – and Christopherson realized that Lawrence’s story had the potential to become a riveting movie.

It’s Lawrence who makes Peace Officer as compelling as it is: He would be a fascinating character under any circumstances. The film opens on Lawrence at his current job clearing blocked sewage lines. He’s calm and cheerful as he details the aspects of the job, and that patience and goodwill remains as he tells the story of his son-in-law, his attitude a marked contrast to the brutality and carelessness documented.

The SWAT team was called out to the house Wood shared with Lawrence’s oldest daughter, Liz, after Wood called 911 to report that he’d “beaten and raped his wife” (Liz says he beat her during an argument, but denies being raped). None of the family disputes that Wood should have been arrested, but they don’t believe his death was necessary.

At a time when it’s hard enough to convince the public that police shootings of unarmed victims are unjustified, it can seem especially quixotic of Lawrence to try to get justice for a man who hurt his daughter. However, Lawrence has a unique perspective: It was during his time as sheriff that the SWAT team was established, and he thinks Wood’s standoff with the cops could have been resolved without injury.

As the film details, the idea of police department SWAT teams first rose to prominence in Los Angeles after the 1965 Watts riots. Lawrence decided to establish a team in the Seventies after dealing with two notorious criminal investigations – the Hi-Fi murders, and Ted Bundy’s killing spree. But, he says, the SWAT didn’t kill anyone during his tenure.

The movie has a lot to say about the way Wood’s standoff was handled. Wood spent most of it in his truck with two guns, but seemed to close to surrender at various points. While attempts were made to negotiate with Wood, no mental health professionals were on hand, according to Lawrence, nor were Lawrence or Wood’s father allowed to speak with him. After Wood was killed with a single shot, the authorities first reported that he had shot himself, but were later forced to admit he was killed by an officer.

The film also tells the stories of Matthew Stewart and Danielle Willard, two cases that arouse Lawrence’s interest. Willard was shot and killed as she backed her car out of a parking space – two officers were attempting to arrest her after witnessing what they believed was a drug deal. Lawrence demonstrates that at the distance from which the officer shot his gun, he was in no danger of being hit by her car. The discovery brings an indictment, but the charges are later dropped.

Stewart, an army veteran, has his house raided in the middle of the night after police discover he’s growing marijuana. Stewart appeared unaware that the men who had broken down his door were police officers, and reacted by pointing a gun at them. The resulting shootout left both Stewart and several officers injured. One officer, James Francom, died. After befriending Stewart’s family, Lawrence visits the crime scene, meticulously recreating the events of that night by tracing each bullet hole (and digging up several bullets investigators failed to collect), casting doubt as to whether it was Stewart who fired the fatal shots, and not, as he puts it, “friendly fire.”

Christopherson and Barber don’t shy away from moral complexity, and they offer each side their chance to speak. Francom’s colleagues and superiors give their version of events, and the severity of the injuries the other officers suffered is explicitly shown. Speaking after the Tuesday night screening of the film, Lawrence praised Christopherson and Barber for their skill as interviewers, saying, “They could get the devil himself to confess his sins.” Christopherson, for his part, tells the Chronicle that “making a documentary is all about genuine, sincere relationships, and being compassionate towards everyone.”

Neither Lawrence, who lost his uncle, also in law enforcement, to lead poisoning from a bullet, nor Barber and Christopherson, whose grandfather was in the FBI, seek to cast blame on the individual officers so much as on the “institutional problems,” as Christopherson puts it, that lead to these situations. Lawrence says he wants to get “back to the ideal of what law enforcement was meant to be,” and to better protect the lives of officers, as well as civilians.

“We don’t have equality under the law,” Lawrence argues in reference to the immunity from prosecution officers who kill civilians often receive. “You should be innocent until proven guilty, but a dead person can’t prove their innocence.” He says that the documentary has opened up opportunities for him that he hadn’t even considered, such as invitation he received to speak at a conference in Dallas.

Christopherson, who teaches documentary film at St. Edwards, and Barber, a film professor at BYU in Utah, plan to continue on the festival circuit while they look for a distributor to release the film. Given the relevance of the subject, not to mention the unique perspective it offers, one hopes this movie makes its way back to Austin soon.