Todd Berger says some - but not too much! – about his doomsday rom-com

According to writer-director Todd Berger, the less you know going into It’s a Disaster, the better. An air of mystery surrounded the panel “Case Study: It’s a Disaster,” a last-minute addition to the conference roster. It may’ve been one of the festival’s more ingenious marketing coups. 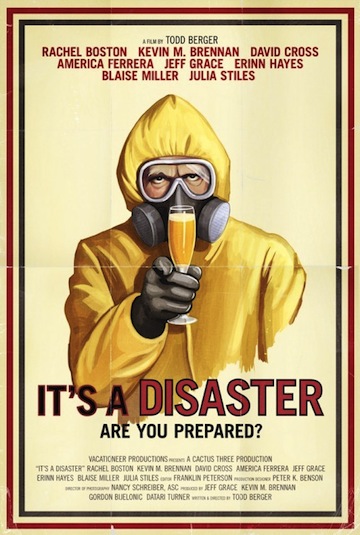 During the session, Berger tried to say little as possible about the film’s plot. Judging from the attendance at the Paramount last night, the reverse-psychology behind this "case study" ploy worked. Without giving too much away, It’s a Disaster can be described as a doomsday rom-com about a Sunday brunch gone epically sour, a cross between Dinner at Eight and Dr. Strangelove. Imagine the inverse of Final Destination: a horror flick that’s all character development and no violence.

Berger did reveal a good deal about his process. While writing the screenplay, he said, he was drawn to the element of chamber drama in Night of the Living Dead, all that dreadful downtime, claustrophobia, and scheming. He began to picture how people in different romantic situations might react to a sudden crisis. 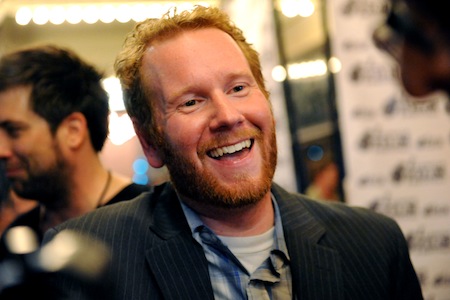 The film’s four couples represent a spectrum of relationship stages. There’s a pair on their third date (David Cross and Julia Stiles), two married sets, one happily (Kevin Brennan and Rachel Boston ) and one unhappily (Erinn Hayes and Blaise Miller ); and the terminally engaged duo everybody knows (America Ferrera and Jeff Grace ). To differentiate the individuals, he explained, he based each on one of the eight stages of grief. Julia Stiles piped up and said she wasn’t sure what stage of grief she was supposed to be; none of the other actors did either. “It was more of a jumping off point than a throughline,” Erinn Hayes explained. Still, it’s an interesting mind game to play during the film. (Wondering what happens? Hint: not a zombie attack.) 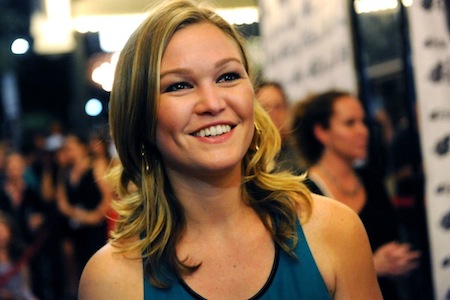 Berger – a University of Texas grad who screened first film The Scenesters at AFF in 2009 – offered three pieces of advice for aspiring filmmakers. First, don’t fall prey to “Entourage Syndrome,” or the excessive articulation of individual lines; overlapping dialogue sounds more natural. Second, if you want to get people to see your movie, don’t waste your time and money printing and distributing postcards. Hiring a local PR agent is more effective. Last but not least, don’t give distributors screeners of your film. Find a way to get them into the show. They need to witness crowd reaction firsthand. Having seen the film, it’s no surprise that It’s a Disaster already got picked up by Oscilloscope. Crackling with screwball energy and paced to near perfection, this is definitely one to see with an audience, with or without a date.