From the Vaults: One From the Heart 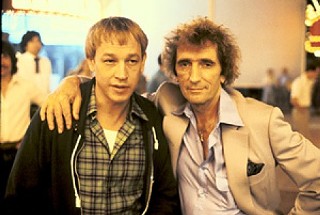 Frederic Forrest and Harry Dean Stanton in "One From the Heart"

As the Alamo Drafthouse embarks on its celebration of the action films of the Summer of 1982, I'd like to put forward my pick for the best film that momentous summer: Francis Ford Coppola's One From the Heart. Released in August and unfolding over the course of a July 4th weekend, the film was panned by most critics from the get-go.

Consequently, the film was barely seen in its initial theatrical run, and even Coppola's re-issue of the film (with minor trims and tucks) in 2003 failed to earn the film the audience it deserves.

Filmed completely within his Zoetrope studio, One From the Heart followed up Coppola's huge success with Apocalypse Now and The Godfather: Part II. The setting is an artificial Las Vegas of the mind, and the soundtrack by Tom Waits (which he performs with Crystal Gayle) makes the film something of a musical – the most artificial of all movie genres. Teri Garr and Frederic Forrest star as a couple who, instead of celebrating their five-year anniversary, pick fights with each other instead. Garr's character goes off and finds a Latin lover (Raul Julia) straight from one of her travel posters. Forrest's character operates a junkyard called Reality Wrecking with his best pal, who is played by the great Harry Dean Stanton. Nastassja Kinski is a circus performer who does a mind-blowing high-wire act. But as I said in my review, the real high-wire act really belongs to Coppola, who pays allegiance here to the movie gods of artifice.

READ MORE
More One From the Heart

'One From the Heart'
Coppola's critically, commerically, and conversationally ravaged Las Vegas romance makes a comeback