Releasing 'Fireflies in the Garden' 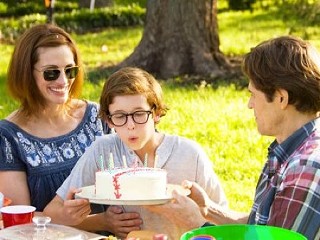 Back in 2007, Austinites were tantalized by Willem Dafoe sightings at Whole Foods while he was in town shooting Fireflies in the Garden. Also starring in the picture are Julia Roberts and Ryan Reynolds.

Fireflies premiered at the Berlin Film Festival in February 2008 and has opened in a dozen or more European countries since then. But a U.S. theatrical run has been out of the question … until now.

It was announced this week that Fireflies in the Garden will be independently released on Oct 14 in a few theatres in New York and Los Angeles, with hopes to expand further. The film's three-year, stateside delay was the result of the failure of Senator Entertainment, the company that largely financed and planned to release it. (Senator also plays a role in the shabby story of why another Austin-area-lensed film, All the Boys Love Mandy Lane, has yet to be released.) When Senator closed shop in 2009, Fireflies was left in limbo and the producers just recently regained their rights to the film.

Whether writer/director Dennis Lee's semiautobiographical drama that was inspired by his mother's death in 2002 will make it to Austin theatres remains to be seen, but we remain hopeful. Lee released the following statement: "“I am so pleased our film will finally get a theatrical release in the U.S. Anyone familiar with our story knows the road to this moment has been paved with challenges. It’s not lost on me how much care and determination it took to bring Fireflies to light. I am so grateful for all the support I’ve received.”

Fireflies' star-studded cast also includes Hayden Panettiere, Emily Watson, and Carrie-Anne Moss. Roberts, who plays the film's matriarch, was pregnant with her third child while filming Firelies, though the film was a family project with her twins, who were toddlers at the time, in tow and the cinematography helmed by Roberts' hubby Danny Moder. Lee, who previously won a Student Academy Award for his short film, "Jesus Henry Christ," told Variety that his new cut of the film is "closer to his original director's cut." A new trailer has also been released.